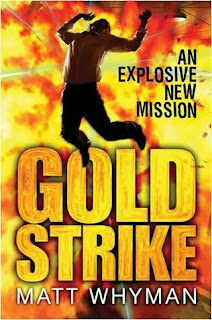 Carl may have escaped from Camp Twilight, but now he's being pursued by a bounty hunter in the pay of the US government, and an al-Quaeda assassin. Wanted dead by one and alive by the other, he must use all his skills as a manipulator of both systems and people to survive. Can he play one enemy against the other in his bid to live another day? Hiding out in the least likely place possible - a warehouse hiding untold treasures - Carl has to harness the powers of Cleo, the super-computer who controls it. For Cleo is primed to unleash aggressive counter-measures at the least sign of intrusion - but can Carl get her on side?

Firstly, I’ve not read Matt Whyman’s previous book (In the Cage) before tackling Goldstrike and was initially worried that I’d not be able to catch up. I should not have even let a glimmer of worry enter my mind – Goldstrike works perfectly as a standalone with very brief flash-backs to cover the backstory.

Matt’s writing is more-ish. Goldstrike is a very quick read and a satisfying one. There are guns, bad guys, good guys, computers, hacking, a pretty girl obsessed with bullion, lasers, mysterious organisations...Matt’s gone and created a whole list of cool things, stuffed them into Goldstrike and ticked all the boxes. It quite easily may not have worked at all but the author’s skill comes to forefront here as instead of lambasting us with technobabble about the hacking, which is after all the crux of the story, he shows a few techniques Carl uses and the rest is implied and as a reader I totally got it. And I was thankful that he decided not to throw me dead with too much tech talk.

I liked Carl. I liked the fact that he seemed regular and normal. He had an amazing skill when it comes to messing around with computers and technical equipment but instead of being a braggart and a bit annoying, he was a normal guy, doing his best to fly under the radar and keep himself from being noticed. All he wants to do is stay alive long enough to create an even deeper cover for him and Beth.

And in Cleo, a truly advanced supercomputer, he sees his opportunity and grasps it with both hands. Sections of the novel had me wincing. I was convinced Carl was going to be turned to toast by doing something stupid and alerting Cleo to his shenanigans. But naturally, Carl’s the hero and nothing bad can happen to him. Right?

Wrong. A rogue spy gone even more rogue and heartless is out to get him. A massive bounty’s gone out on Carl and Beth’s heads and it’s with very meticulous and terrifying care that the bounty hunter works his contacts to track them down. The guy is terrifying and it’s not because he’s loud and obviously violent (he is a few times) but because he is so methodical and super-careful.
The climax is this insane actioner that deserves to be filmed. Goldstrike is part Bourne/part Bond/Part Die Hard 4.0 and it works on various levels. And the fact that it’s aimed at kids makes it probably cooler still.

Find Matt Whyman’s site here with more info about the rest of his novels. Goldstrike is out now from Simon & Schuster.
Who wrote this? Liz at 2:49 pm