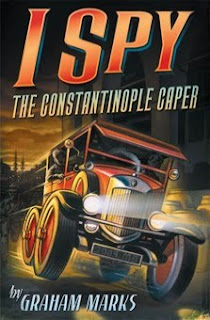 Synopsis:
Trey is thrilled to be accompanying his father, influential Chicago businessman T Drummond MacIntyre II, on a trip to Constantinople. Armed with a suitcase packed full of his favorite tales of super-sleuths and daring detectives, Trey can't wait for his holiday to begin. So imagine his excitement when, as father and son board the Orient Express, Trey thinks they are being followed by a mysterious stranger. Surely Trey's been reading one too many spy capers? However, as they make the journey across Europe, Trey's father appears distant and evasive. Is he simply busy with work, or is something more untoward happening? When T Drummond MacIntyre II goes missing, Trey is plunged into the secretive and dangerous world of 1920s espionage, trawling the chaotic streets of Constantinople in search of his father's whereabouts. But while Trey has always dreamed about being a spy, nothing can prepare him for the breathtaking escapades that await him in this exotic and enticing city.
I've now re-read ISpy twice - I am that geeky. I liked it for it's incredible pace, the setting, and the mystery surrounding Trey and his dad. It made me think of lazy Sunday afternoons lying in front of the TV watching classic movies with my mom and dad. It made me want to jump on a boat with my luggage and go travel the world.
It's a cracking story - whilst reading it, if you close your eyes a little, it's not difficult to imagine that you are on the Orient Express. It's easy enough to imagine seeing someone suspicious following you around, especially if you realise your dad's not quite who or what he seems. Especially when you get to Constantinople and it's quite obvious something is definitely going on...but what?
Mr. Marks' writing is effortless to read whilst Trey is perfectly cast as the slightly sulky teen who realises that going "on holiday" with his dad means him seeing various cities and places, maybe learning too much about them, whilst his dad attends various business meetings. It's not ideal. So no wonder his imagination starts running off with him.
I was initially hesitant about a) setting / locale and b) era of setting. I was pretty sure adults would "get" the 1920's milieu properly, the nervousness of the era etc. but I wasn't sure if children would and was therefore pleasantly surprised that the author used the lightest of touches when describing the ongoing political machinations and why everyone was spying on their neighbour.
Very cleverly written it takes Trey from one extreme, physically and mentally, and throws so many curveballs at the poor kid, you can't help but feel sorry for him. But Trey is pretty together and with a bit of help and relying on his own resourcefulness he plunges into the quagmire and unravels the intricately bound story.
ISpy is very much a standalone novel. I suspect that if there are others in the pipeline, they will be too. It's definitely a boy's own adventure novel, harkening back to a different era. I'd recommend it to readers aged 10+, and also to readers who find history and new places interesting to swot up on. You can't help but wanting to dip into more information about some of the real life characters Trey meets along the way. Written with a keen eye for detail, by an author who clearly remembers what it feels like being a boy with an overactive imagination and a penchant for finding trouble, ISpy by Graham Marks is a deliciously exotic read and I'm hoping to read MORE Trey MacIntyre books in the future.
ISpy is out now in all good bookshops. Find Graham Mark's website here and his publishers - Usborne - here.
Who wrote this? Liz at 8:45 am

This one looks a really fun read. And I love the cover! - Looks like it suits the mood perfectly :)