Musing about The Splendor Falls by Rosemary Clement-Moore

Just been chatting to one of the publicity peeps over at Random House Children's Books and mentioned I can kick myself for NOT taking photos of this parcel which arrived 2 weeks ago at Casa De Jager.
It was mysterious. It was different and oh so cool.
Large book shaped parcel, in a handwritten envelope. Took the book out. It was wrapped in black paper, bound by a heartsblood red velvet ribbon. I died a little because yannow, it looked mysterious and I wanted to know (immediately!!!) what it hid.
So I opened it up, maybe a bit less carefully than I should have, to reveal this deep purple book entitled "The Splendor Falls" by Rosemary Clement-Moore. The book looked mysterious. The handwritten note on thick wrinkled paper heightened this illusion (don't ask me what the note said as it's at home at present but I will reveal it later when I get a chance), along with the scattered dried rose petals inside the parcel.
It looked stunning. Mysterious. And I've been dying to fall into it, and I may, very soon. But, CA from RHCB just sent me a photo of what the package actually looked like: 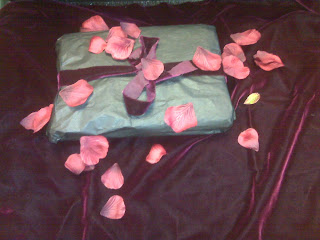 About The Splendour Falls

Sylvie Davis is a ballerina who can’t dance. A broken leg ended her career, but Sylvie’s pain runs deeper. What broke her heart was her father’s death, and what’s breaking her spirit is her mother’s remarriage—a union that’s only driven an even deeper wedge into their already tenuous relationship.
Uprooting her from her Manhattan apartment and shipping her to Alabama is her mother’s solution for Sylvie’s unhappiness. Her father’s cousin is restoring a family home in a town rich with her family’s history. And that’s where things start to get shady. As it turns out, her family has a lot more history than Sylvie ever knew. More unnerving, though, are the two guys that she can’t stop thinking about. Shawn Maddox, the resident golden boy, seems to be perfect in every way. But Rhys—a handsome, mysterious foreign guest of her cousin’s—has a hold on her that she doesn’t quite understand.
Then she starts seeing things. Sylvie’s lost nearly everything—is she starting to lose her mind as well?
Doesn't this sound simply scrummy?
Who wrote this? Liz at 3:56 pm

Oooh, stunning! Yeah, I've seen people in the UK receiving those beautiful packages. I've bought my copy a while ago and I can't wait to read it!

Hey, I know Rosemary! She's a fellow Dallas-ite who I was briefly in a crit group with a few years back.

Have you read her Prom Dates From Hell book? Very snarky, fun read. I think she won the YA Rita for it (or the next one in the series).