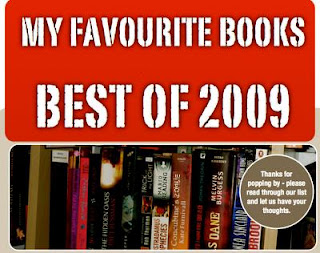 After much consideration, punctuated by several cups of tea and gnawed nails, I’ve chosen these (in no particular order- trying to rank them would have given me a nosebleed) as my favourite books for 2009:-

11. The Name of the Wind - Patrick Rothfuss.

Ok, yes, there are 11 (technically 17, but I’ve counted series / trilogies as one as, where possible, I read these back to back) rather than the traditional 10 or 12, but it works for me.

These 11 dragged me into their respective worlds hook, line and sinker- they’re the books I happily devoured rather than read. I’m a simple creature when it comes to fiction- I want to be entertained, and I want the story to engage me on an emotional level- I want to rage, cheer and weep. I want to be exhausted -sated- when I reach The End.

These guys delivered the goods and left me wanting more.
Who wrote this? Mark at 6:41 pm

Great list of books, some authors I've been seriously tempted by previously! :)

I want to rage, cheer and weep. I want to be exhausted -sated- when I reach The End.

Have you read, The Chaos Walking Series by Patrick Ness then? You'll get all of them. Well maybe not the sated one... Still waiting for book 3 for that bit!

No I haven't... will ferret around and see if I can find them :)

Great list and happy reading in 2010. I've still not read The Name of the Wind as I don't like to read a book in a series where I can't gulp them all down back to back but I am beginning to think I need to make an exception for Pat Rothfuss!