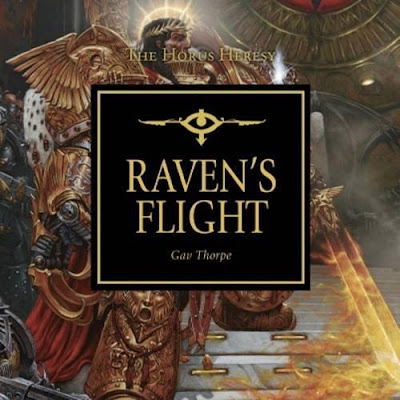 After the horrors of the Dropsite Massacre, Corax and his mighty Raven Guard face a desperate struggle to survive in the caves and mountains of Isstvan V. Escape from the roaming Chaos Legions seems impossible.

Meanwhile, Colonel Valerius of the Imperial army begins suffering horrific dreams, believing the Raven Guard to be in trouble – are such nightmares enough to initiate a daring rescue?

The decimated Legion must hold out against the forces of the World Eaters long enough to reach an improbable salvation and escape this hostile world.
--

Hostile world? More like a deathtrap. The Horus Heresy culminated in the assault on Terra, but for me the Dropsite Massacre stands out as the greater, more bitter betrayal- the first open conflict between the Space Marine chapters. With meticulous planning, the Warmaster Horus and the Legions he had swayed to his cause launched a lethal assault on those who remained loyal to the Emperor. It’s a devastating action, both in terms of the lives lost and that it marked the end of the Great Crusade and everything it stood for.

I was pleased to see that it was being read by Toby Longworth- I’d really enjoyed his reading of James Swallow’s Heart of Rage earlier this year, and I wasn’t disappointed this time either. The characters are distinct and his enunciation is bang on target throughout.

The background effects add to the atmosphere but are never allowed to become intrusive, which lends them more weight when they are employed.

The pace soon picks up as the action switches to the Raven Guard on Isstvan- the action comes thick and fast, with much of the carnage seen from Corax’s perspective and it’s quite a ride when battle is joined. The action, while gripping and bloody, is balanced out by the poignancy of the situation as the fallout of the massacre becomes apparent.

There’s a lot crammed into the 75 minute running time but this flies by, testament to both Toby’s delivery and Gav’s writing. It’s fun and entertaining in its own right, but works best as a supplement the Horus Heresy series.
Who wrote this? Mark at 7:26 pm