Tales of Terror from the Tunnel's Mouth - Chris Priestley 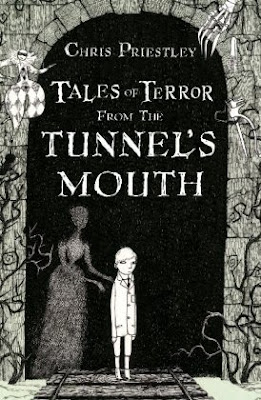 Robert Harper is going back to school, and it is the first railway journal he has ever made alone. And it is not a very usual sort of railway journey. The train stops at the mouth of a tunnel and in order to help pass away the time a strange woman dressed in white tells Robert stories. But these are not the kind of stories normally told to a child. Soon Robert is both entranced and terrified by the strange woman and her macabre stories.
Prepare to be chilled to the bone as Robert discovers just how frightening it can be to be alone on a train with only strangers to keep you company.


Some books are made for summer, for reading on the beach, or at leisure on a sofa in a comfy coffee shop somewhere. Then there's Tales of Terror, perfectly suited for those nights when you're trapped in a creaking old inn on a desolate, storm wracked moor.

As with Uncle Montague and the Black Ship, Chris has given us a trove of deliciously dark and gothic flavoured treats, each one sporting a macabre sting in the tail and written with an old fashioned slant that's perfectly suited to his style of storytelling. The stories are capped with David Roberts' delightfully spiky and Tim Burtonesque black and white illustrations which accentuate the unique quirky voice that the stories have. 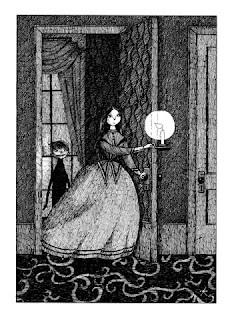 'Gerald' was a particular favourite of mine from this collection, a truly spooky and unsettling little story that really should be read by candlelight.

I thought I'd guessed the the identity of the strange woman who entertains young Robert with the tales and the way the overall theme of the story would pan out, but here too there was a dark 'n sneaky twist.

All in all, it's a wicked read and one that I can't recommend enough for when the nights draw close and winter's fingers scratch at your windows.

Very much looking forward to reading this one, Priestley's stories are quite masterful. What an apt description of the art work as Burtonesque.

Great review! I'll be reading this one soon so god to hear that its good!

This is a definite! I loved 'Uncle Montague'

I loved the first two volumes of tales of terror, it seems Priestly has endless capacity to terrify us!

I just wish I had a fireplace and an audience to read them to!

I really enjoyed this one too!

Great review - and I didn't realise there was a website! I must add that to the review on our site (which just went up today). Thanks!

I love these illustrations! Gorgeous!