The Crowfield Curse by Pat Walsh 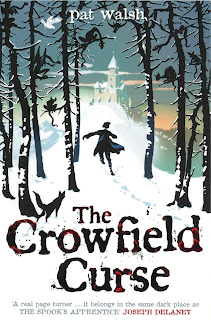 Will knows a secret.

Somewhere in the forest, behind the abbey where he lives, is a grave.

And buried deep in the snow is an angel

But how can an angel die? What has it to do with the monks of Crowfield Abbey, who have taken care of Will since he was orphaned? And why does Will get the feeling that when he looks out, something hidden in the dusk is staring back at him?

On a bitter winter’s day in the year 1347, 14-year-old Will Paynel is sent to the forest to gather wood. He stumbles across and rescues a creature caught a trap – a hob, who comes to share with him a terrible secret. Somewhere in the forest near Crowfield Abbey, an angel lies buried. With the arrival of two strangers to the abbey, the mystery deepens. Will and the hob are drawn into a dangerous world of Old Magic, a bitter feud and ancient secrets. Will needs to unravel the truth and put right an age-old wrong if he is to survive, and time is running out…

Some books you pick up to read and then you look up and discover an entire afternoon / train journey / evening has disappeared. The Crowfield Curse is a book like that. It’s written so skilfully, by a storyteller who has managed to convey such a sense of place, that you feel transported to a time long gone.

I think Pat Walsh is perhaps going to struggle a bit in the future – but read on, before you gasp in shock, thinking I’m being mean – because like Meg Rosof, she’s difficult to quantify. I’ll try and put my thoughts forward and you can decide if I’m being a bit silly.

The Crowfield Curse defies being pigeonholed. It’s a historical novel, set in the 1300’s in England. The author brings to that age a setting very reminiscent of Umberto Eco’s The name of the Rose. The monks’ and Will’s world is incredibly small. It is a mean world, where heating and food isn’t readily available, the hardships they face are very real and Will’s life is difficult. He fondly remembers his family who died in a fire and dreams about almost-forgotten days when food was fresh and tasted lovely and about being warm.

But The Crowfield Curse is also a fantasy. Fae creatures like the hob exists, as do the Seelie and Unseelie Court and of course, the rumour about the dead angel buried in the woods.

Now, other authors have tried mixing historical and fantasy together and it’s not worked very well. In the case of The Crowfield Curse it does work very well.

There is never a sense of the story being untrue. Will’s realisation that his world is actually much larger than he first thought it to be, is slow in coming and it’s a poignant read. He is hesitant to believe it. He questions it and wrestles with it internally. He’s aware that should he speak to any of the monks about any of his discoveries they would think he’d gone insane / become possessed and he’d no doubt be exiled from their community.

But what struck me the most about Pat Walsh’s writing is how beautifully The Crowfield Curse is written. Wonderfully evocative and literary, it stands in danger to be that cut above standard books for this age group. And I’ll sob my eyes out if readers aged 9+ overlook it, thinking it may not be any fun, as the mature language may initially seem a bit daunting. It has so much to offer.

It’s intelligent and funny and the main character Will comes across as a genuine and likeable main character, someone you can identified with. He’s a normal boy who gets thrust into extraordinary circumstances yet he has to pretend that everything is the same it’s always been. This makes for great conflict and character development and you keep your breath in when the hob does silly things like go and sit in church with Will because dammit, if he gets caught, who knows what will happen!

The mystery about the two unexpected visitors to the abbey heightens the tension, especially when Will realises that neither man is who he appears to be. Small signs of rebellion in Will’s character begins to show, as he starts considering a life outside of the Abbey. The arrival of these strangers seem to further crack and break that delicate balance that kept Will caught in the Abbey’s net. But things never work out as planned. As the story moves towards it conclusions, some questions are answered, but new ones are levelled and it’s then that you realise that Will’s life is due for a dramatic change.

Intricately woven with enough menace throughout you keep paging, wanting to find out the rest of the story makes The Crowfield Curse a cracking read – especially for this, darker, stranger time of year!

Ms. Walsh’s writing is effortless. It’s books like this that give aspiring and untried writers false courage because you read it and go “wow, she makes it look so incredibly easy, I’m sure I can pound out one of those in a few weeks”. The hard work and polish shines through, making The Crowfield Curse a book that will no doubt break out from its established age banding. And I hope it does. It also yearns to be read out loud, which I did to Mark, making him listen to some snippets of the story as it unfolds! Ah, the things we do without authors and publishers knowing when we go geeky about books.

The Crowfield Curse by Pat Walsh is published by Chicken House on 4th January 2010. Find Pat’s website here.
Who wrote this? Liz at 9:27 am

I'm not sure just where as it is not published till next year, but I have definitely seen this one about the 'net somewhere.

A great review which makes me definitely want to read it. :)

I'm so shallow, but the cover is GORGEOUS!

Wow thanks for alerting me to what sounds like a great book, another to add to the list of books to get.

This sounds brilliant - right up my street. Thanks for the recommendation!

I hope this gets nominated for the Cybils Awards, for rather selfish reasons-- I want to read it very badly, and my reading list for the next few months is the middle grade sci fi/fantasy nominees! It sounds so lovely....