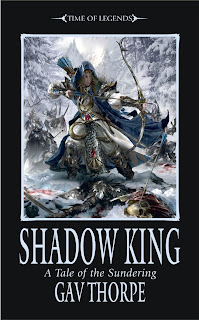 When his family is betrayed and slain, Alith Anar, ill-fated prince of the Nagarythe, is forced to walk a dark path. He finds refuge in vengeance, seeking out the murderers of his kin and declaring war against an entire nation. The island of Ulthuan is locked in a bitter struggle with their evil counterparts, the druchii. While noble high elf princes raise armies to defend their homeland from invasion, Alith Anar strikes from the shadows... for he is the Shadow King.
Favoured by Kurnous, he hunts his enemies from the darkness in a bloody quest for revenge without end.
Shadow King is the second instalment of the Black Library's Sundering saga and continues the story begun in Malekith. It's not a sequel in the usual sense of the word in that while it overlaps the story begun in Malekith, it stands alone in its own right, much like the books of the Horus Heresy series.
I enjoyed Malekith enormously, so got stuck straight into Shadow King- in truth, the first time I read the above blurb is when I sat down to do the review! 'King runs concurrently with the story of Malekith up to approximately halfway through before heading into uncharted waters; it's mechanism that works perfectly well whether you've read the first book or not.
Gav has put in a lot of work to establish Alith as a sympathetic and likeable character, which is essential- when it all starts hitting the fan and his metamorphosis into the Shadow King begins, it's this foundation of his character that holds it all together and gives his despair and burning thirst for vengeance the impact it should have. And it's a bumpy ride- going to war with the Dark Elves on their home territory isn't an option that leaves much room for woolliness and daydreaming about unicorns. No quarter is given or offered; it's a dirty, bloody business, as it should be.
Alith isn't a superhero of any sort; he's an orphaned prince, the last of his line, scarred by the reality of war and crippled by his hatred for the druchii. With his lands swallowed by the Dark Elf expansion and only the remnants of his army standing beside him, there isn't much he can do against the might of the armies and cultists of Morathi. His decision to lead his faithful company in a guerilla war against the druchii on their home turf, sowing discord and fear as they strike from the shadows and vanish, is a pivotal moment, and well executed.
That Gav is a veteran of many tabletop battles and has really given some thought to the strategies that both sides would employ is apparent when it comes to the larger battles and how Alith deploys his shadow warriors. It's very satisfying, almost as much as it is to see that the evil characters have been given free rein to, well, be evil.
Sure, there were a couple of minor bugs for me, but certainly nothing that made it any less enjoyable to read. The cover is one example- a gorgeously rendered picture, but the Alith's bow should be bent more, otherwise that bowstring's going to have some slack in it when it's released. And his left sleeve wouldn't be so voluminous- it's an invitation to snag the bowstring. And don't even get me started on the back-slung quiver. Minor bugs.
But it's the story that's important, and there's certainly no issue with that.
It's engaging, and very more-ish. Shadow King is a cracking, solid read and a shouldn't be confined to the reading lists of Warhammer fans (for whom it should be mandatory!) - it's a perfectly good heroic fantasy in it's own right and demands a wider audience.
Who wrote this? Mark at 10:39 am

Thanks for the review, Mark, certainly looking forward to this! haven't read Malekith yet but will be getting to it soon.

BTW love the fact that you pointed out the bugs in the cover - awesome covers have their niggles, that's for sure. :-)

The newest batch of fantasy titles from TBL have been top notch- I'm talking here about the Empire/ Heldenhammer and Malekith/ Shadow King combos- can't wait for part III of each :)

As for the cover niggles thing, it's a pet hate/hobby.

I always wonder how an author comes up with names like 'druchii' and 'Ulthaun'. It sounds like a skillfully written story though!

Read it as well, wasn't too crazy about it. Loved your review, though!