Malekith - A Tale of the Sundering, Gav Thorpe 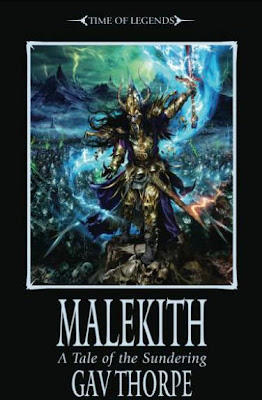 Far to the west of the Old World lies the fabled land of Ulthuan, island home of the elves. Thousands of years ago, when men were but fur-clad savages, elf civilization flourished; they were truly masters of the world. But even at the peak of its glory, a seed of corruption gnawed at the roots of elf society; Chaos had cast its shadow over Ulthuan. The elves would be plunged into a bitter and bloody civil war that would tear their nation apart, and ruin the very land they trod on; a time known as the Sundering.

Passed over to succeed as king, elf general Malekith is wracked by jealousy and bitterness. Under the pretence of rooting out the pernicious cult of pleasure that is corrupting elf society from within, Malekith plots his revenge. When he betrays Phoenix King Bel–Shanaar and attempts to seize power for himself, Malekith triggers a tragic sequence of events that plunges the realm of the elves into a civil war from which they will never recover.


And so begins Malekith, the third instalment of the Black Library’s Time of Legends series.

Malekith charts the rise of the titular character, the son of Aenerion, first of the Phoenix Kings of Ulthuan, the mythic battle-king who led the war and eventual triumph over the daemons of Chaos. It follows Malekith from his earliest days, charting his path from noble prince of Ulthuan to his fateful decision to strike out and wrest the crown from Bel-Shanaar's lifeless fingers.

Gav Thorpe has infused Malekith with a purpose and nobility that makes it nigh on impossible not to like him, despite knowing the dark destiny that awaits him and the tyrant he’ll become. It lends the base act that catapults the elven empire into civil war an air of tragedy, and the story is all the more richer for it.

Gav has over a dozen titles to his credit, including the Dark Elves army rulebook for Warhammer Fantasy, so there really couldn’t have been a better person step up and take on the challenge of bringing a tyrant like Malekith to life.

And that’s exactly what he does.

I immersed myself in the book and devoured it in four sessions; it reads extremely well, the story unfolding at a measured pace, gently (but repeatedly) coaxing you into reading ‘just to the end of this chapter’. Malekith’s character is given enough depth that when things begin to go awry, I could understand where he was coming from without the need for further exposition, and more importantly- I cared.

The supporting cast aren’t treated as lavishly but then, this is Malekith’s story and the focus is rightfully on him. All in, it’s a cracking read whether you’re a Warhammer fan or simply after a good fantasy novel; for fans of the Dark Elves though, it’s a must!

We are fortunate enough to have THREE copies of Malekith to give away, courtesy of Black Library. If you fancy a chance to win, all you have to do is email us at: myfavouritebooksatblogspot(@)googlemail.com with your name and snail (physical/postal) mail address.
The competition is open world-wide. One entry per household (we have sneaky software) and duplicate entries will be disqualified. The competition will run until the 5th of January 2009.
Get mailing!
Who wrote this? Mark at 11:30 pm

But this one is promising.
So I entered competition.