The Painted Messiah by Craig Smith 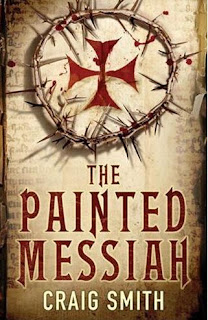 A legend persists that, after the ‘scourging’, Pilate commanded that his victim be painted from life. Somewhere, the painting survives, the only true image of Christ, granting the gift of everlasting life to whoever possesses it.

Kate Kenyon, the wealthy young widow of an English aristocrat killed on a Swiss mountain, has an addiction to mortal risk. She feeds it by engaging in the armed robbery of priceless artefacts with her accomplice and lover Ethan Brand, a Tennessean who owns a bookshop in Zurich. Their latest target is a priceless ‘Byzantine’ icon hidden in the tower of a chateau by Lake Lucerne. So far they have never had to shoot anyone. This time will be different.

Thomas Malloy is a retired CIA man looking for his first lucrative freelance assignment. His chance comes with a presidential favour to a rich but ailing televangelist. Malloy’s task seems simple enough: pick up the preacher’s newly acquired painting from a Zurich bank and get it to the airport. But, once in Switzerland, Malloy’s old friend, the enigmatic Contessa Claudia de Medici tries to warn him off his mission.

Sir Julian Corbeau is an international criminal holed up in Switzerland to avoid US extradition proceedings. He is also the sadistic head of the modern Knights Templar. He had the painting and now he desperately wants it back as well as to wreak a bloody revenge upon those who stole it.

As the contenders vie for possession the bullets fly, the body count rises and the secrets of the portrait gradually unfold. We learn how and why it came to be painted and how an object depicting the Light of the World could exert such a baleful and malignant influence on those who possess it.

Let me say right off: The Painted Messiah came as a big surprise. Very few debut novelists can pull off religious thrillers with such apparent ease as Craig Smith. He has clearly spent a lot of time doing his research and working on a spell with nefarious powers to ensure his writing sucks you straight into the novel.

Do read this if you are into contemporary thrillers with historical background and information and a lot of action. Again, I am loathe to do comparisons but if you like Scott Mariani, Steve Berry, Dan Brown, Will Adams, David Gibbins and Sam Bourne you will enjoy Craig Smith’s offering.

The writing is taut, the action is Bourne-like in its relentlessness and it hardly lets up. None of the characters in the novel are model-citizens which is something I liked and the villains are not clichéd moustache-twirling-cat-stroking ego-maniacs either. They are pretty grim, to be honest but they suit the novel and the storyline very well.

I enjoyed reading it – the plotlines are well planned and the dual timeline is written with great care. The back of the novel has a lovely section in which the author chats about his research and choices he made whilst writing The Painted Messiah.

If you’re stuck for a me-present this Christmas or if you have a dad, uncle or anyone who likes well researched historically based thrillers, this is definitely one to add to your list to buy.

Read an extract here and find out more about Myrmidon Books here.
Who wrote this? Liz at 5:21 pm