Creature of the Night, Kate Thompson 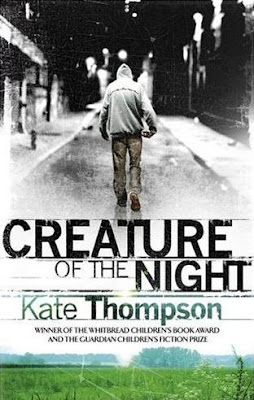 I could hear Dennis talking to my ma. 'She was little,' he said. 'Little like me. But old. Older than you. Those words gave me a cold shock. I could see Dennis imagining fairies, but old ones?

When Bobby's mother moves the family into a rented house in the country, a neighbour tells him that a child was once murdered there. Bobby doesn't care. All he wants is to get back to Dublin and to resume his wild life there, stealing from the crowded shopping streets and racing stolen cars at night. But getting his old life back doesn't turn out to be so easy, and the longer he spends in the old cottage, the more convinced he becomes that something very strange is going on there. Was there really a murder? And if so, was it the one he has been told about?

I bought the book as a recommendation from Amazon and I'm happy to say that I am not disappointed. I read it in a matter of hours as I couldn't put it down.

The main character, Bobby, is by turns likable, awful, sweet, vulgar and devious. He lies, cheats and steals and is all in all, not someone you should like. But you do, because the author, Kate Thompson, has given him enough of a slant to show that he is an ordinary boy in a very harsh world where parental guidance is almost non-existent but where peer pressure is everything.

His mother drags him and his little half-brother, Dennis, from Dublin to the countryside, running away from her own life and the people she owes a lot of money to. They find a small cottage to live in, at the bottom of a farm, run by the Dooley family. The original occupant of the cottage, a Swedish chap, Lars, had disappeared, leaving his old Skoda behind. No one suspects anything at first as he took his wallet, drivers licence and his passport with him.

The book opens with Bobby's adamant statement that he will not be staying in the countryside, that he hates it all, that he's going back to Dublin, no matter what. And he does, by fixing up Lars' old Skoda's flat tyre, he sets to meet up with his mates shortly after they move in.

Things do go awry - his mates are busy with their own lives and the one he does meet with seems pretty disturbed. They write off the Skoda in a big crash, the mate, Mick, almost kills the driver of the other car by kicking seven hells out of him, and Bobby gets sent back to the countryside where the repercussion of the theft is in the form of having to work off the debt of the stolen car to PJ Dooley, the farm's owner. Who in turn would be giving the money back to Lars' mother in Sweden.

Reading the novel you are faced with the almost animilistic way that Bobby reacts to any kind of kindness, shown either to him and his family or to other people. He just doesn't get it. His world is: do to others before they do to you. But slowly he comes to realise that other people do not live the lives he does with his mother, who lives from one week to the next, waiting for the dole, borrowing money and buying "on the book". Others' decency shows him that there is another way. There is a tremendous moment of self-realisation in the novel that had me sniffling quite a lot. It is then that you see the ray of hope for Bobby and you root for him, more than before.

At the heart of the novel is the creeping supernatural element. The fact is that the cottage is built on a fairy path - between two fairy forts. PJ Dooley's mom warns Bobby and his family to set out the milk and cookies, to keep the fairies happy, or they would be sorry. Everyone finds it hilarious, except for little Dennis. He has nightly rendezvous with the tiny woman who comes to visit the house. The tension escalates in the household and it is through the author's skill at keeping a tight reign on her characters, that you experience the slow burning terror of their situation.

The ending is not rushed. The terror culminates into a murder mystery that answers a few questions, but throws open a lot more. The final chapter, the Epilogue, rounds the novel off nicely and I closed the covers with a happy sigh.

It is an amazingly written book, very strong and with a unique voice. I would highly recommend it to both adults and teens, but with a cautionary note: there is strong language, a lot of it. Some of it jarred me, but you have to realise that it's not done to be over the top or to draw attention to how "cool" the characters are trying to be, but it reflects the speech-patterns and the way of life, as portrayed in the novel.

Find the author, Kate Thompson's website here.
Who wrote this? Liz at 10:20 am