The Magic Thief by Sarah Prineas 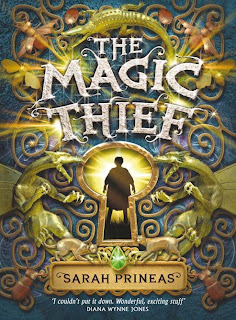 In a city that runs on a dwindling supply of magic, a young boy is drawn into a life of wizardry and adventure. Conn should have dropped dead the day he picked Nevery's pocket and touched the wizard's locus magicalicus, a stone used to focus magic and work spells. But for some reason he did not. Nevery decides to take Conn as his apprentice on the provision that the boy find a locus stone of his own. But Conn has little time to search for his stone between wizard lessons and helping Nevery discover who-or what-is stealing the city of Wellmet's magic. Meanwhile Conn is hiding his own secret - his connection to the sinister Underlord, Crowe ...

I received The Magic Thief a few months ago from Quercus, shortly before it was published in September and I really regret not reading this excellent book before now.

In Conn we have a unique hero – he’s cunning, street smart, a thinker and intelligent enough to realise that he will die on his own out there on the streets of Twilight (the bad side of town) if he doesn’t change his luck. His luck changes when he decides to make a grab for the wizard Nevery’s locus magicalicus – in theory, the power in the stone should have struck him dead or done some severe damage to him. It did not – this intrigued Nevery and the crotchety old wizard drags Conn off to a Chophouse where they have a rather one-sided conversation which reveals a lot about Conn’s character and that of Nevery’s.

Conn is not a wisecracking braggart, which we find all too often in books aimed at children – and this is what I found very refreshing. He is deliberate and clever, taking his time to figure things out, but then he is also very stubborn and quick on the uptake. For most of the book, Nevery calls Conn “boy” and he does not mind, Conn in turn calls Nevery by his name, something which causes a bit of a stir amongst other apprentice wizards. Nevery is feared for his strong and often violent magical abilities. But, apart from being grumpy, demanding of his apprentice, servant and secretary, he is a pretty (for a lack of a better descriptive word) cool guy. He listens to Conn’s opinions about magic – they communicate, maybe not as equals, but Nevery gives Conns thoughts credence and that I appreciated. Their master and pupil roles hinge on that give-and-take which make all good partnerships work.

Another character in the book I really enjoyed is Benet – he acts as Nevery’s bodyguard and muscleman. Benet says even less than Conn and I initially thought bad things of Benet but it turns out he’s actually quite a nice guy – he cooks, tidies and knits...yes, you read that correctly. He knits. A big strong muscleman who can lay about him with a large stick, knits skilfully and expertly. A fantastic character quirk which I loved. (thinks about teaching Mark to knit...)

The novel is aimed at 8-12 year olds but I can quite confidently say: kids (all ages) and adults will enjoy it too. The writing is clever and the story very engaging. The mystery surrounding Conn’s background came as a bit of a surprise to me. But then I was nodding, slapping my head, going: “of course!”

The novel would suit people who enjoy Diana Wynne Jones’ books and Joseph Delaney’s Spook books. The Magic Thief is the first part of a trilogy with the others due for release in 2009. This will make a perfect stocking filler for younger and older readers. The novel was published in September 08 by Quercus – website here – and find the author’s website here, with more information about the other upcoming novels.
Who wrote this? Liz at 10:12 am