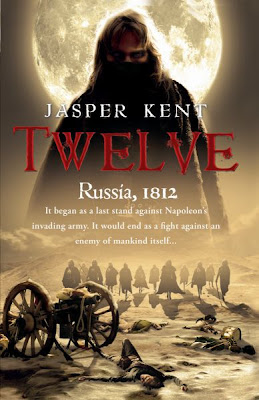 The voordalak - a creature of legend; tales of which have terrified Russian children for generations. But for Captain Aleksei Ivanovich Danilov - a child of more enlightened times - it is a legend that has long been forgotten. Besides, in the autumn of 1812, he faces a more tangible enemy - the Grand Armée of Napoleon Bonaparte.

City after city has fallen to the advancing French, and now it seems that only a miracle will keep them from Moscow itself. In desperation, Aleksei and his comrades enlist the help of the Oprichniki - a group of twelve mercenaries from the furthest reaches of Christian Europe, who claim that they can turn the tide of the war. It seems an idle boast, but the Russians soon discover that the Oprichniki are indeed quite capable of fulfilling their promise.

Unnerved by the fact that so few can accomplish so much, Aleksei remembers those childhood stories of the voordalak. And as he comes to understand the true, horrific nature of these twelve strangers, he realizes that they've unleashed a nightmare in their midst...

What struck me the most about this debut novel is how the author managed to successfully weave and link historical fact with legends and Russian peasant lore to create something fantastical and compulsively readable.

The writing is fresh with a strong male narrator voice. We meet a cast of characters who we can all identify with – soldiers, ordinary men, who love their country, who fight to keep it safe, maybe not in the same way we would expect, fighting hand to hand in the front lines, but they serve by being spies, doing damage behind enemy lines. They have their faults and failings but they are comrades in arms and they share a common concern: stop the French, no matter what! They have watched Bonaparte march across Russia towards Moscow and they are terrified that by the end of summer, all of Russia will be under the French heel.

What would you do when the stakes are that high? Would you strike a deal with the devil? This is exactly what the one character does. He sends a message, without informing his comrades, to a group of men whom he had fought with in the past, in other campaigns. Their fighting prowess is unparalleled and he feels that with their help, they would do enough damage to the French to make them think twice about entering Moscow. The small group of friends agree that this definitely something to consider, although some of them have their doubts, but they bide their time await the arrival of the Oprichniki.

This meeting with the Twelve and their leader, sets the tone for the book and as a reader you are a bit breathless as you sort of know what’s happening, who these people are and what will no doubt happen. But the author keeps you guessing – you think you know, but do you really know..and what you know might not be correct!

Needless to say, things go pear shaped as the honourable fighting men the majority of the small group expected turned out to be something far worse than they could have imagined in their darkest nightmares.

As a main character Aleksei stands out: he's loyal, trustworthy, keeps his head in battle, loves his comrades, he is a good fighter, he's dealt with torture at the hands of the Turk and yet he still comes out swinging. We experience the happenings through his eyes and he's a competent observer. Through Aleksei you realise that life goes on, no matter what happens - even during an invasion. He finds love in a very unexpected place and his internal struggle between his new found infatuation with his mistress and his loyalty and love for his wife and small son, reflects the struggle of what is happening in the novel, on a much grander scale.

I am hoping to not give any of the plot away, it would not be fair – as it won’t even detract from the enjoyment of the writing and the story, but this is one of those novels where you should just walk up to it, sit down and read it for the sheer pleasure of the storytelling.

What is fair to say is that this is going to be one of the big debuts of 2009 in the spec fic genre and for good reason. The writing is strong and vivid, the storytelling and suspense is pitched at the right frequency to drive you a bit crazy and the tension just keeps mounting. The amount of research the author’s done for the background is excellent, it will make some of the most pedantic historians happy whilst the folklorists will rub their hands in glee because we get to meet the voordalak of legend and they in turn get to meet an adversary they had not prepared for.

A thrilling fantasy novel, which can easily be marketed as literary alternative fiction. I hope it receives attention from the lovers of historical novels too – there is much more to it than the sum of its parts. If you are a fan of Simon Scarrow, Bernard “Writer Legend” Cornwell, George RR Martin, David Gemmell – in other words, epic fiction, be it straight fantasy or historical fantasy, then this is a must read. Diarise it’s release date, being January 2009, published by Bantam Press. Find Jasper Kent’s website here.
Who wrote this? Liz at 4:25 pm

When you write that the Voordalak meet an enemy they were not prepared for, who are you referring to? Aleksi and friends? Or a different supernatural party?

Another good review from you. The book is on my list for 2009

Taliesin - I'm tempted to say...read the book. But I won't - the voordalak meet their match in Aleksei and his friends. But the voordalak are quite arrogant, self-assured and therefore did not expect normal mortals to catch on to who / what they are.

Darkwolf and Edi - thanks, both - I can't recommend this highly enough.