The Poison Eaters by Holly Black 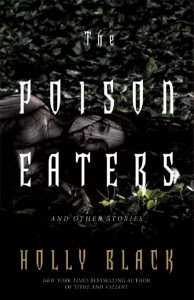 Holly Black is one of my must-buy authors so I was excited to get my hands on her first short story collection. I must admit I've yet to read the last few stories in this anthology so I'm sure I'll be back before the month is out with another favourite. I'm quite spoilt for choice already but one of the most poignant was Virgin.

It's written from the viewpoint of Jen, a girl who's run away from her foster home. She's living on the streets of Philadelphia during the summer, mulling over what she should do when the weather gets colder. She meets Zachary, a homeless boy who juggles for cash and is instantly drawn to him. He's quiet, kind and completely different to the other people she knows from the streets. They bump into each other in the library where's he's researching Unicorns.

Zachary lets Jen in on a secret. His mum was a drug dealer who sold information to the police. She and Zachary are dumped in some woods and, as they walk aimlessly, she's shot and killed by the people she betrayed. As Zachary is crying and scared in the woods a unicorn arrives and changes his life. Jen is enthralled but she tells her friend and Zachary's story soon turns into something to mock him with. The events that follow are a mixture of touching and tragic. I felt desperately sorry for Zachary, the innocent with the awful past who trusts too easily.

As with all of the stories I've read so far from this collection, Virgin is a perfectly formed gem which had a flavour of Valiant where beauty and magic can be found in the most desperate of places.
Who wrote this? Essjay at 8:00 am