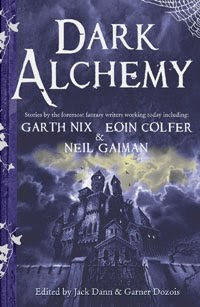 Wizards and witches have lived in the human imagination for centuries. From ancient to modern times they have held great power in our literary lives. Here for a brand new audience is a collection of electrifying stories that show us benign and evil, ambivalent and determined characters that will stalk our imaginations and thoughts for some time to come. From the pens of Eoin Colfer, Garth Nix, Neil Gaiman, Jane Yolen and many more spring an incredible array of stories that will thrill readers young and old.

I've chosen to review Winter's Wife by Elizabeth Hand because I am in love with it. Also, because she is in theory a new to me author to read. Although Elizabeth Hand has been an author whose books I've seen often, I've never for no reason other than laziness and overcrowded shelves, picked them up. I now want to read her back-catalogue, because of this short story.

There is nothing over the top in Ms. Hand's writing. Justin's voice as a young boy is spot on, as are his observations about Winter, the area they live in, and subsequently, Winter's wife which he goes and fetches from Iceland.

Vala sounds fantastically odd and quirky and the second she shows up in the short story, you know things have changed, you're just not sure if it's for the better or worse.

Justin is employed by Winter to help them build a decent house as Vala is pregnant. Progress is good but then Winter discovers that his neighbour has sold his land to a developer and all-round nasty piece of work. Things kick up a further notch and come to blows when the developer guy starts chopping down ancient trees in the forest.

It's Vala who steps forward and acts. I'm not revealing what happens, but it's pretty twisty and scary and you will fistpunch the air...just a tiny bit.

Why this works is because Winter and Vala are so patently suited to one another. Ms. Hand does an amazing job of creating a new mythology here and it held me rapt. I've read the short story maybe five times now, it is that good. And I'm thinking to myself that if she ever wrote the rest of Vala and Winter's story, I'd be there in a flash, cash in hand.

Hi Liz -- thanks so much for this lovely review! I'm so glad you liked the story -- it was a long-simmering response to a nasty bit of ecological outrage here where I live in Maine. Drop me an email at tbird@midcoast.com if you like, I'll send you my new book, Illyria, I think you might like that too.