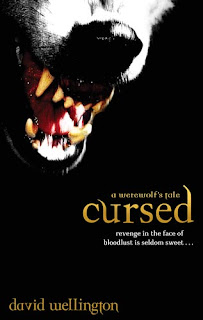 Revenge in the face of bloodlust is seldom sweet…
There’s one sound a woman doesn’t want to hear when she’s lost and alone in the Arctic wilderness: a howl. For Cheyenne Clark, there’s a bad moon on the rise. When a strange wolf’s teeth slash her ankle to the bone, her old life ends, and she becomes the very monster that has haunted her nightmares for years. Worse, the only one who can understand what Chey has become is the man - and wolf - who’s doomed her to this fate. He also wants her dead.
Yet, as the line between human and beast blurs, so too does the distinction between hunter and hunted…for Chey is more than just the victim she appears to be. But once she’s within killing range, she may find that - even for a werewolf - it’s not always easy to go for the jugular.

Like me, you will possibly look at that and think: "another werewolf book?" or "definitely a re-hash of Kelley Armstrong" and like me, in both cases, you would be wrong.
There is nothing at all romantic about Chey or Powell, the man she meets after she's attacked by a lycanthrope. The story is fierce and gripping and harsh and brutal. I close my eyes and I can see the setting the author has decided to use to portray the isolation Chey finds herself in. The place sounds insane and only the toughest of the tough survive up there, in the lands of the Inuit and timberworlves.
This story is all about Chey's character growing stronger and tougher to cope with an impossible and unpleasant situation. After she escapes drowning in a flash-flood, Chey stumbles through the wilderness, heading north, towards civilisation. But then she gets chased up a tree by a pack of wolves, Chey thinks life can't get shittier. Well, it does. The "normal" wolves scatter with the advance of something altogether scarier, the larger werewolf that makes itself home in this forbidding wilderness. Chey shimmies higher but her ankle gets swiped by the wolf's claws. She looks down in those eyes and recognises their colour and their shape. She knows she's found the thing she's come out here to hunt.
Chey manages to stay in the tree until the wolf disappears. She stumbles through the forest, keen to find someone to help her. And eventually she does. His name is Dzo. Dzo decides that she needs help and takes her to his friend, Powell. Yes, Powell and the wolf is the same being. Chey realises this but plays her game carefully. She gets as much information from Powell as she can about him, about where they are, what is likely to happen to her as a wolf, etc.
Slowly, a camaraderie builds up between them and Chey has to struggle very hard to bite down on the those feelings because - well because there is something we're not told yet. We don't know why Chey's come out here to the middle of nowhere. We know she's after the werewolf, but why? Also, how does her hunting the werewolf affect her as she's been bitten by him and will be changing into a wolf herself? How far is she prepared to go to extract revenge?
I genuinely thought that Cursed by David Wellington ranks up there with some of the best horror / dark urban fantasy we've seen for several years. I think it worked so well for me because of Chey's character. She wasn't necessarily just a kick-ass heroine, but she was definitely strong and determined and driven. She thought with her heart and her head and not her groin (sorry, I had to put that in there) and kept moving forward, all the time, no matter what she went through. I admire Chey hugely and would like to say to the author that he definitely has a new fan.
Cursed is not a very big book, but it took me a while to read it. I did it in several readings because it felt so much heavier (in my mind) than I initially thought it would be. I'm a very visual reader - I think I've said this before in other reviews - so if I can't picture my characters I'm reading about or their setting, a book loses me. In Cursed I wanted to hide in my bedroom, with the light on and my electric blanket turned on full. Deeply atmospheric and more thoughtful than some readers may expect, I'd recommend Cursed with two big thumbs (paws?) up.
Cursed is out in the first week of September, published by Piatkus.
Who wrote this? Liz at 4:16 pm