In 1994, Mike Mignola created one of the most unique and visually arresting comics series to ever see print: Hellboy. Tens of thousands have followed the exploits of “the World’s Greatest Paranormal Investigator” in comics form and novels. In 2004, writer/director Guillermo del Toro made Hellboy the number one film in the country, reaching millions more fans. Now see Mike Mignola’s creation as seen through the eyes of some of today’s best writers in film and literature.
The above is the write-up from the back of the anthology: Odder Jobs as edited by that amazing man, Christopher Golden.

This is one of my favourite anthologies of all time. Not just because it's about Hellboy whom I love, but because Mr. Golden has pulled together some fantastic names to write some of the short stories including friend of MFB, Tim Lebbon, Frank Darrabont, Charles de Lint (swoon) to name but three of the big names. He also managed to entirce Del Toro and Robbins on board to play in the sandbox and their offering Tasty Teeth is both creepy and surreal and I loved it. 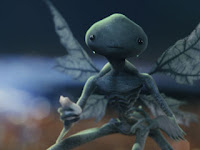 It's right at the end of the anthology and much shorter than I would have liked, but if you have seen Hellboy II (I loved loved Prince Nuada) you may remember that the team fight against a bunch of small creatures called the tooth fairies. This short story is very much the precursor to that scene.

In the story Hellboy is on the trail of some missing kids. He finds only dry bones within the lair of some kind of monster...soon he discovers two kids locked up and instead of being scared of Big Red the stare at the things behind him. It's the tooth fairies and they like nothing more than eating your bones.
Needless to say, Hellboy does things his way and with a giant explosion he saves the day, rescuing two of the missing kids.

The story is short, as I mentioned before. In fact, it's more a scene / vignette, but it's a pretty cool way for the anthology to end regardless. Stay tuned for other reviews from Odder Jobs.
Who wrote this? Liz at 1:13 pm