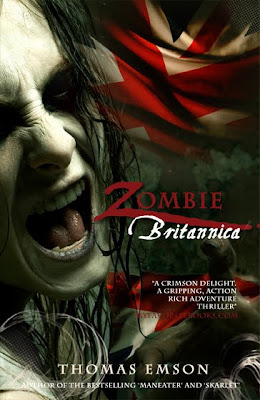 In 2009, Canadian researchers warned that a zombie plague would wipe out civilisation.. unless we were ready. We weren't.

As temperatures reach unprecedented levels, the dead rise- and eath the living. There is no warning. There is no time to prepare. And with tens of thousands dead or infected, another waking nightmare comes to terrorise the survivors- the victims now rise up, a new wave of zombies hungry for human flesh.

As the nation teeters on the edge of extinction, those who survived the onslaught fight for their lives, and for the lives of their loved ones..


When Thomas Emson’s zombie apocalypse hits the UK, sweltering in the hottest summer on record, it hits with a bang. It hits the ground running, the Usain Bolt of apocalyptic visions. By the end of the second page the body count is in the hundreds, and the zombie tide is flowing unchecked through the capital cities, a tsunami of gnashing teeth and spurting fluids.

ZB begins with working mom Carrie’s story as she sets out to make her way back home, where her young daughter is hiding from the dead and her good for nothing father and his newfound hunger for living flesh. Her story is the central theme but it shares ZB with two other windows into the apocalypse.

In Wales, the initially surly and emotionally stunted Vincent, struggling to connect with the girl he fancies, reluctantly shows her around the local castle, unaware that its walls will save their lives long before their first kiss.

On the congested highways outside of Glasgow, a dysfunctional argues their way to the airport, heading for a traffic jam that will see them lose far more than their seat on the ‘plane.

ZB reads at a ferocious pace, reflecting the pace at which the apocalypse spreads. This is no gradual rising; all around the country the dead erupt from the earth, hungry for flesh.

It’s a classic scenario and one that lets Emson explore the effect the psychological trauma of seeing a horde of ragged, decomposing cannibals feasting on the living would have on people; there’s no mistaking the dead for any kind of rampaging drug addicts or mysterious infectees here. As it would, the reaction varies from person to person, from group to group depending on the brand of psychosis hidden deep beneath the skein of their mundane, everyday selves, brought violently to the fore as their minds try to process armageddon. Sure, it calls for you to take a leap of faith on a few points, but if you enjoy this genre then you would most likely understand that civilisation is a veneer, and one that gore encrusted nails would quickly scratch away.

By the way, the 2009 study into a zombie attack that the blurb (italics above) refers to can be found here if you're interested.
Who wrote this? Mark at 9:00 am