Tome of the Undergates : Sam Sykes 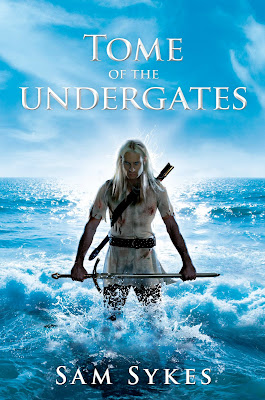 The name never uttered without scorn, they are long loathed for their knowledge of nothing beyond violence and greed and their utter disregard for human life, least of all their own.

And Lenk, a young man with a sword in his hand and a voice in his head, counts them as his closest company.

Charged with retrieving the Tome of the Undergates, a written key to a world long forgotten by mankind and home to creatures determined to return, Lenk is sent after ancient evangelical demons, psychotic warrior women and abominations lost to myth. Against them, he has but two weapons: a piece of steel and five companions as eager to kill each other as they are to help him.

At its heart, the premise of Tome is the classic quest novel- a group of heroes banding together to seek out a lost treasure, danger at every turn and failure spelling the rise of an unstoppable evil which will destroy them and doom the world.

And then Sam got hold of it and pulled, stretched and twisted it like some sort of literary playdough, squeezing out characters that aren’t at first people you’d really like to know. They’re adventurers, and in the world of Tome, that makes them one step below something that a hobo’s scraped off his shoe.

It opens with pirates having boarded the ship that the characters employer has chartered, and while it’s always good to have a bit of action upfront, you really are dropped into the middle of things. It felt a bit like I’d missed the first 10 minutes of a movie I’d been waiting to see. The characters are launched into play with little ado and it takes a bit of wrangling keep track of who’s who and who’s doing what as the battle rages on. All of which isn’t helped by the main character having some kind of schizophrenic episode and the pirates’ grandiose manner of speaking.

But here’s the thing. Keep at it, and by the time the nigh invulnerable sea-demons replace the pirates, things are inching into place.

It’s an ongoing process all the way, but the characters endless griping and in-fighting does evolve into something less distracting as the group dynamic becomes more recognisable. Initial wobbles aside, Sam’s characterisation is good, and while the teasing glimpses of the characters respective pasts that he drops in amidst the bickering and battles never explain how such a disparate group got together, there’s a sense of each having come from a dark, desperate time in their life.

It took me until about halfway through to start getting along with Tome as well as I’d hoped I would, but I’m glad I stuck with it. There are niggles that remain, sure – there’s still some fat that could have been trimmed from the manuscript, the combat could have been tightened up, along with some of the more over the top language, but Sam’s vision holds it together. That he was having buckets of fun putting his characters through the wringer of his world comes through clearly, and that spark is notoriously infectious.

Loud, brash and crazier than sack of weasels on angel dust, Tome is a shot across the bows of the fantasy genre and I think we have lots to look forward to from Mr Sykes in the coming years.
Who wrote this? Mark at 2:29 pm

"Loud, brash and crazier than [a] sack of weasels on angel dust..."

I vote Sam uses that as a cover blurb.