In beauty, like the night - Norman Partridge - The Living Dead (SSM) 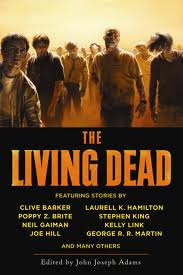 One of the 34 short stories comprising ‘The Living Dead’, I chose to read this more or lessly at random, although it’s safe to say the title played a part in the decision making process.

Set in the aftermath of a zombie outbreak, it’s the story of a young media type named Nathan who, on the verge of having the perfect apocalypse hideaway, finds that the zombies he’s inadvertently sharing the island with have a very different agenda.

Nathan’s character is quickly established, and the situation is built with successive strokes, before it’s all shaken up as the zombies make themselves known. And they’re the stars of the show, defying expectations and being suitably bitey. They rock Nathan’s world, and his descent into the legion of the living dead begins.

It’s quick, gripping and fun – everything a short story needs to be. Now to read the rest!