The blogpost where we find out more about Irish publishers: O'Brien Press

We are pleased to have these guys take over MFB for part of the day to promote EDDA, Conor Kostick and themselves. Before we were approached by O'Brien we'd not heard of them before and I thought today, as part of Conor's blog tour, it would do us no harm to find out more about O'Brien Press and to see who their authors are and what kinds of books they publish. 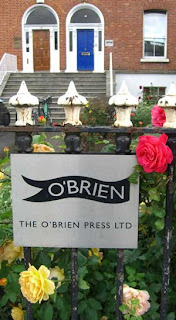 The O'Brien Press was established in 1974, evolving out of a family-run printing house, and over the past 37 years has established a reputation for quality and excellence in publishing for adults and children.

Since its foundation, The O'Brien Press has published over 1,200 books, approximately 550 of which are still in print. From the beginning, Publisher Michael O'Brien has been committed to quality in writing, editing, design and illustration. This commitment has been recognised by numerous awards down through the years including the Irish Book Awards, the Bisto Book of the Year Award and awards from the Reading Association of Ireland. This has extended to awards from abroad also.

The O'Brien Press is the only Irish publisher to have received the prestigious International Reading Association Award and boasts over 400 works available in translation in over 30 languages and 50 countries.

The O’Brien Press has a strong history of finding the best, new talents in writing and illustrating and was the publishing house that discovered Eoin Colfer, Judi Curtin and the current Irish Children’s Laureate, Siobhán Parkinson.

The O’Brien Press has an extremely successful record in securing exclusive biographies of some of the biggest names in Ireland and the UK, such as X Factor star Mary Byrne and The President of Ireland, Mary McAleese.

It is the publisher of the bestselling Agnes Browne Trilogy by BAFTA Award nominee Brendan O’Carroll, whose hit TV series Mrs Brown’s Boys was based on characters from his O’Brien Press books The Mammy, The Granny and The Chisellers.
You can view a full list of our titles, including our exciting new range of books for 2011, at www.obrien.ie.

A big thanks to Donna and everyone at The O'Brien Press for indulging MFB and trotting out this blogpost for us!
Who wrote this? Mark at 1:47 pm