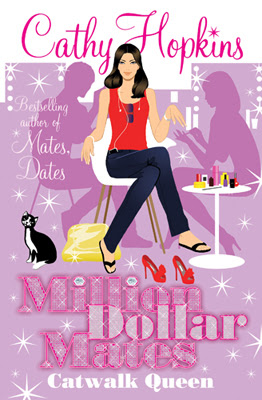 Pop diva Tanisha comes to live at Porchester Park, where she's mentoring a modelling competition.  Jess is encouraged to enter.  It's her chance to stand out from the crowd and get the attention of the boys in her life.  But competing on the catwalk brings out all her worst insecurities.  Has she really got what it takes to be a catwalk queen?


I am such a girly fan of Cathy Hopkins's books and writing.  Which, if you know me, should come as a big surprise.  I am not a girly girl but there is something about Cathy Hopkins and Cathy Cassidy's writing that really just gets under my skin and I love their writing and the stories they tell to bits.

For some reason I've not read the other Million Dollar Mates books, so I thought to read the newest one to see how easily I could get into the existing series.  I am happy to report that although the books are a series, it looks to me like each book can be read as a standalone.  You are briefly caught up with the minimum of fuss as to who Jess is, what's going on in her life and who the boys are she's currently crushing on.  (And I have to say, I do think JJ sounds like a honey!)

Jess, our main character, is just an average normal girl whose dad is the caretaker and manager of the very prestigious Porchester Park apartments in London.  She lives with her dad and her brother (who sounds so lovely but is a bit clueless) and she is best friends with Alisha Lewis (the daughter of an American actor) Pia Carslon and good friends with Flo and Meg from school.

When they discover that a new resident moving in to Porchester Park...the girls are all in a fizz! Who could it be - Pia and Jess dash upstairs to chat to their friend Alisha who, as the daughter of the super weathly and super famous Jefferson Lewis, is far more in the "know" than they are.  Alisha reveals that it is none other than the pop diva Tanisha and the girls all swoon and fall about as they all love her to bits.

When they meet her in Real Life, it turns out that Tanisha is actually as nice as they could have imagined.  And it also turns out that she was in town to promote a new modelling competition and when she suggests that Jess definitely should give it a go Jess and her friends are all excited and thrown in turmoil.

In a flurry of excitement, and a bit of a "what's the worst that could happen" Jess and Flo go about wearing pretty clothes and make-up and have the various boys in their lives take photos of them upstairs in Alisha and JJ's apartment.  It turns into a bit of a party and what starts off as a joke gets quite serious when it transpires that both Jess and Flo are chosen to be part of the competition.

The book uses the super popular TV shows like Britain's Next Top Model and America's Next Top Model as a framework but Ms. Hopkins has made it her own, concentrating heavily on Jess's relationship with her friends and family, grounding her firmly in reality.  There are various ups and down and as Jess as our moral compass we are shown what a tough life aspiring young models have, being told that they are fat, their noses are too big, their ears too outy, their tummies to saggy or their bums too big.  Both anorexia and bulimia are touched on but not really investigated or dwelled on.  Instead we are shown these things and left to make up our own minds.

Jess's discomfort with the whole selection process is interesting as between her and Flo they talk about the astonishingly pretty girls who seem to crumble before their critics as the selection process continues.  Girls who appear so full of confidence and who could literally have anyone and anything they want, suddenly see themselves the way others see them, as somehow lacking in minor department.  The process makes both girls uncomfortable and they aren't sure how to deal with it.  So at the end of the competition, when they have a chance to sort of show off what they've learned, they put all they can into a fashion show at their own school, asking Tanisha to help them with it.  And it's unlike anything that has ever been portrayed before and I loved it.

It really is a very interesting book and Ms. Hopkins writes in a heartfelt and real way about the way media portray young women, upholding unrealistic photoshopped models and comparing them to the real girls of the world - who are lumpy, funny, charming, too tall, too skinny, too fat, to sport, too clever, too bespectabled, too big-boned...and asks the question who would we rather be?

I really do think, that even if you've never read Cathy Hopkins and if you are a girl (aged six to sixty) this book will speak to you about self-worth, confidence and dealing with what nature has given you.  It also will speak to you about being a girl, about having good friends and how sometimes you have to buck the trends of the world around you, not even to be rebellious, but to be true to yourself.

I cannot recommend Million Dollar Mates: Catwalk Queen enough.  The final scenes are so great, clever and empowering, I can't urge you enough to pick it up.  It's writers like Cathy Hopkins that lift your soul and make you feel a bit...floatier than you ought to be, like you can do anything if you set your mind to it and if you had the right kind of friends on your side and from experience, I heartily approve.

We only have the first book in the series in the school library. Cathy Hopkins is very popular with the year 9 girls. I will have to add the otehr 2 books to the library wish-list.
Good to know that they can be read as a standalone. T
Thanks for the fab review :D

I've just read my first Cathy Hopkins and was surprised how much I liked it!

I have never read a Cathy Hopkins book, I feel as though I am missing out... I may have to check some out soon!

Oh I'm really glad to hear that these books can be read out of series order as I keep meaning to read a book by Cathy Hopkins (or Cathy Cassidy for that matter!) but my library doesn't seem to have the first.

I almost groaned as I read the first part of the description - this book sounded very predictable. But then, all of a sudden, it got quirky and different - definitely one to look out for!

I am nearly 20 and still love all of cathy hopkins books. I too read out of order ( 3rd,1st, 2nd ) but enjoy them massivly very good review BTW xx