The Tail of Emily Windsnap by Liz Kessler 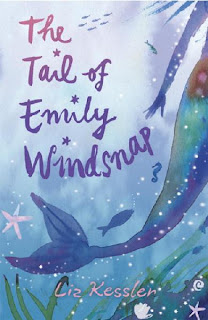 Synopsis
Emily lives on a boat, but her mother has always been oddly anxious to keep her out of the water, and it is only when she has her first school swimming lesson that she discovers it is her natural element. As soon as she gets into the sea, she grows a tail!

I've cut most of the synopsis as it appeared to give a great deal of the plot away! I see this series of books whisk in and out of the library and they're ever popular so I thought I'd see what the fuss was all about. Emily's mum has brought her up alone and never speaks about her dad. As a result they've become a close unit and have always lived on a permanently moored boat. Emily's recently started a new school and is trying to make friends and settle in. However, her first ever swimming lesson is a disaster. As soon as she hits the water her legs fuse and she's left with a beautiful tail instead. Feigning cramps she gets out and her legs reappear but is left with an almost seemingly insurmountable difficulty - what to do about her newly discovered tail?
Emily's voice is so striking, from the first page she held my attention. She's both appealing yet feisty and independent. She trusts her gut instincts and doesn't give up on anything. Despite the fact that she's afraid she's a freak she has to know more so sneaks into the water that night to see if it's true. Once back in the sea and her tail emerges she swims until she meets Shona, another young mermaid. Their friendship develops and soon Emily discovers more about herself than she thought possible. I loved the way that the friendship comes from the most unexpected quarters and that her peers at school aren't the only people who can make her feel like she belongs or has worth
Aside from single-parenting, friendship struggles and identity themes, The Tail of Emily Windsnap is also incredibly heartwarming. There's also a mystery side to the story as Emily struggles to work out what has happened to her father. She's forced to make difficult decisions and I was right there beside her, completely engrossed in her tale (sorry!). It was also very funny in parts especially the conversations between Emily and Shona as they try to understand each other's phrases of speech or ways. It's a lovely book or, as Shona would say, very swishy.
Who wrote this? Essjay at 7:30 am

You have got to love Liz Kessler's books!

The Tail of Emily Windsnap vs. Forgive My Fins?