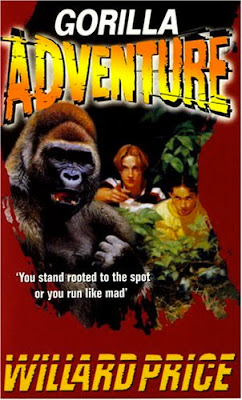 Hal and Roger Hunt head off for another challenging mission- this time to search for gorillas deep in the Congo jungle. But when the boys stumble across the evil trade in baby gorillas, someone seems determined to silence them once and for all..

While Gorilla Adventure is part of the Adventure series, it's essentially a standalone story that can be read either on it's own or as part of the series. First published in 1969, Gorilla Adventure is part of a classic tradition of stories from the golden age of adventure, before the world and the magic of uncharted territories was googled into extinction.
The story sees brothers Hal and Roger Hunt being sent on a mission into the Congo by their wildlife collecting father. Their purpose? To capture a series of rare and exotic animals and bring them home to be sold to zoos and conservatories, with the prize specimen on their list being a highland gorilla from the deepest jungle, a concept which in today's eco-conscious world seems utterly bizarre and quite shocking. But, written in the era that it was, no great fuss is made on this point, and while Hal and Roger's attitude seems disconcertingly mercenary at first, as the story progresses and the come up against the ugly truth of the impact of poaching a distinctly pro-conservation message comes through which makes them far more sympathetic and likeable.
The story itself is a rolling catalogue of the stars of the African jungle interspersed with a cast of supporting characters drawn in broad brush strokes, who are really only there to support Hal and Roger as they stumble across a increasingly fantastic array of the rarest animals. Price, however, presents his menagerie in a way that makes you want to plan a safari, or at least a day trip out to a decent zoo, which more than makes up for it.
An unfortunate by-product of portraying the brothers as cool headed, larger than life adventurers though is that they come across as too cool, that the wondrous animals that seem to be all but throwing themselves at their feet are all a a bit ho-hum and to be expected. This persists with some of challenges thrown at them, and while I could live with this, the one example of this that jarred me from the story was when Roger is hit in the eyes by a spitting cobra. Rather than be incapacitated by this, he proceeds to first suck the venom from a colleague's snake bite, administer an anti-venom serum to the hapless man, and then capture said cobra in a sack before deciding to succumb to its venom!
That said, the book is still fun to read- don't overthink it, and just let yourself go along for the ride. For all its idiosyncrasies, the sudden ending and the years that have passed it has a quaint innocence and manages to conjure the sheer wonder and magic of Africa, and to bring home the unexpected fragility of some of its mightiest denizens.
Who wrote this? Mark at 8:00 am