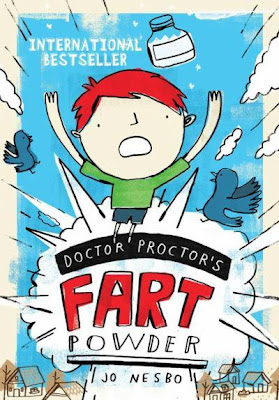 Doctor Proctor has finally created something to help him fulfil his dream of becoming a world-famour inventor- a super-strength fart powder than can propel people into outer space!

DPFP opens with a young girl named Lisa watching new neighbours moving into the house where her best friend used to live, and meets 10 year old Nilly, who’s the smallest boy she’s ever seen. Nilly’s heard every joke and comment about his name and his size, and wants nothing more than to play his trumpet in a marching band on the upcoming Independence Day parade. But then Nilly meets Doctor Proctor, an eccentric scientist whose most recent invention was a powder that makes your body glow a luminous green, a meeting that leads to the first test of what will become a super strength version of his Fart Powder.

But while Lisa, Nilly and the Doctor are trying to survive the explosive, pants-ripping results of the tests and find a way to make the Fart Powder a commercial success, there are others who want to get their hands on the Fart Powder and claim the rewards for themselves.

There’s a lot more going on in the background though, with an escaped anaconda on the loose, a bitter music teacher, playground politics and a daring escape from jail all adding to the chaos. Nilly and Lisa are likeable, distinct characters throughout, and Nesbo doesn’t let them stray into becoming annoyingly precocious. The story has a lighthearted, fun feel to it and with short, punchy chapters punctuated by Mike Lowery’s quirky artwork, it reads incredibly quickly and won’t intimidate younger readers.

While some of the humour has a.. Norwegian flavour to it, and perhaps loses something in translation, it’s hard not to laugh when everything revolves around a revolutionary fart powder.
Who wrote this? Mark at 8:00 am

I have already added this to the library wish-list. :D :D

This one definitely sounds like a lot of fun and something maybe my two boys would enjoy. I did have to laugh at the Norwegian humour comment :)