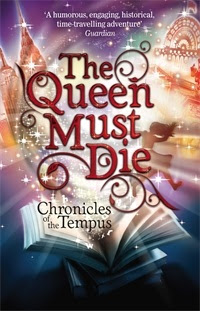 This is the story of Katie Berger-Jones-Burg.

One minute, she’s under the bed of her New York apartment… the next she’s in Buckingham Palace, at the height of Queen Victoria’s reign... A dangerous place to be.

The Royal Family is in mortal peril. In the secret passages of the palace, a plot is afoot. Suspicious figures huddle in the gas-lit streets of London. And Katie is not the only time-traveller in the city…

Grove Atlantic have put their left foot in, then their right foot in...and now they are shaking it all about with the first release of their very first book for younger readers: The Queen Must Die by the mysteriously named K.A.S. Quinn. Ms. Quinn has agreed to give us some information about The Queen Must Die, timetravelling and also an exclusive excerpt. But, before we get on to the blogpost, from the bio on the Atlantic Books website I personally love this line: "She still reads children’s books in bed, after lights out, with a torch." She sounds like my kind of girl.

You’re a time traveller…so prove it!

What if you found someone under the sofa in your house and they told you they’d travelled from the future? Right. I wouldn’t believe them either. I’d call the police.

Katie comes from contemporary New York. But it turns out she’s part of The Tempus, the chosen, and can travel through time.

Princess Alice wants to believe Katie. She likes her immediately, and is excited by this new friend, not chosen through royal protocol. James O’Reilly thinks Katie is a fraud. He is a very loyal subject to the crown, and believes Princess Alice is in grave danger. Alice thinks she can take care of herself. In this part of The Queen Must Die, they are all getting to know each other. They also meet James’ little brother, Riordan, and learn some sad things about James’ life.

When I write, I become very attached to my characters. When I finished writing The Queen Must Die, I became very sad. I had spent over a year with Katie, James and Princess Alice. I missed them. So I was thrilled when my publishers said they wanted to publish a trilogy. Two more books! This meant at least two more years with some of my favourite people.

The second book in this trilogy, The Queen at War, will be published in the spring of 2012.

Katie thought for a moment. She could talk to them about cars, airplanes and rocket ships –– fantastic inventions yet to come. But it could all be taken for fantasy. She had no proof. She couldn’t exactly rustle up a computer out of thin air. And while computers and TV were great, some of the things in the future – well, they weren’t that great. She even knew bits and pieces of their own futures. Wars, looming in the decades to come, and diseases they couldn’t cure, and death. Perhaps she should start with what she’d seen here, that night.

‘Do any of you understand what’s wrong with Prince Leopold?’ she asked.
‘We know he has the bleeding disease, haemophilia, and that Dr O’Reilly is trying to find ways to strengthen his blood vessels.’

‘It has nothing to do with his blood vessels,’ Katie explained. ‘It’s the blood itself. It doesn’t clot.’ Alice looked confused, so Katie tried to explain in simpler terms. ‘When you cut yourself and bleed, the blood quickly changes from liquid to solid. The platelets in your blood bunch together around the wound to form a kind of plug to stop the bleeding. Prince Leopold’s blood doesn’t do this. If he lived in my time, we could give him injections of the bits he needs to make clots in his blood, but I don’t think you can do even the simplest blood transfusions in your time, I don’t think you can…’

‘Will we find the cure?’ Alice asked, looking earnestly into Katie’s face. ‘Can we learn from you, and save him?’

Katie looked down at her green wool socks. She didn’t like what she had to say.

‘I don’t know enough,’ she replied finally. ‘And you don’t learn enough in time… the cure doesn’t come in time…’

Alice’s eyes filled with tears, but James’s eyes showed only distrust and anger. ‘Your diagnosis and analysis of the case are sheer foolishness,’ he protested, ‘made up words and total fiction. Dry your tears, Princess Alice, it’s a hoax. She is a foreigner, bent on badness. I really do insist…’

They were interrupted by a cooing cry followed by the soft slap of bare feet, as a very round-limbed toddler padded around the corner, laughing at the sight of James O’Reilly.

‘Blast,’ said James, ‘the nursemaid must have dozed off again.’

‘He obviously knows you,’ said Katie, as the small child wrapped himself around James’s legs.

James picked him up and hugged him tightly. ‘This is my brother, Riordan
O’Reilly.’

‘That’s a funny name,’ said Katie, forgetting briefly that her own name was Berger-Jones-Burg.

‘It’s an Irish name,’ said James. ‘My mother chose it. She died soon after Riordan was born.’

Everyone else in the room was silent. James held his little brother tight to his chest and turned his face away from the girls. No one knew what to say. James’s anger and distrust, Alice’s hauteur and Katie’s fear evaporated. They seemed petty and silly in the face of death. James O’Reilly might not be likeable, but Katie felt deeply sorry for this stiff, dour, motherless boy.

Alice broke the uncomfortable pause. ‘First things first,’ she said gently. ‘Baby Riordan simply must be returned to his cot. It’s very cold, and he’s only wearing a nightshirt. Then, Jamie, you must leave too. We will all think more clearly in the morning. Katie and I shall meet you tomorrow. If her story is true, and I believe it to be so, then we must try to send her back to her own time as soon as possible. Your family must be frightfully worried.’

Katie thought of Mimi, drinking margaritas in her honeymoon suite in Acapulco. She didn’t see the need to share this picture with the other two. James bowed again to Princess Alice. ‘I will settle Riordan, and then I will be in the corridor, directly outside your door. One call and I will be at your side.’

Alice sighed. This wasn’t how subjects behaved towards her mother. ‘Fine,’ she replied curtly, ‘if you wish to spend the whole night in a chilly corridor that’s up to you.’

‘Now to bed,’ she ordered, running her eyes over her new friend as if she were trying to remember every detail. ‘And if you are a dream, as you say you might be, then let me tell you this before you disappear. This day has been the greatest adventure of my entire life.’ And with that the Princess climbed into bed and fell fast asleep.

This is most definately going on the library wish-list :D