Thank you Liz for asking me to write this, although I have been cursing you over the past week and my list of books has changed almost hourly. I completely agree with what Becky (of The Bookette fame) wrote for MFB the other day when she argued that there are so many great books for the under 14s out there but they can be easily overlooked amidst the constant buzz that goes on for YA titles. These five books are amongst my favourites for the younger age group, although no doubt I will think of five different ones tomorrow. I have tried to go for less obvious choices rather than the series titles I bang on about on The Book Zone whenever a new instalment is released

I read this one some time ago, before I started The Book Zone, and it has stuck in my mind ever since. “Are you a gifted child looking for special opportunities” reads the news paper ad that catches the eye of orphan Reynie Muldoon. His interest suitably piqued Reynie turns up at the time stated and finds himself being set a number of unusual tasks, tests that only he and three other children will pass. These four talented (and decidedly quirky) children soon find themselves going undercover for their recruiter, the Mr Benedict of the book's titles, on a mission to prevent a criminal mastermind from taking over the world. It is easy to say that this story is Dahl-esque, but the comparison can't be helped: it is funny, clever, and as a beedtime reader will have younger readers captivated as they follow the adventures of Reynie and his new friends. Similarly, as with much of Roald Dahl's greatest works this is all about kids versus adults, although at 450+ pages it is a more challenging read than these. Readers just entering their teens will find it a long but ultimately very funny and rewarding read.

Johnny Mackintosh and the Spirit of London by Keith Mansfield

If your boy likes space and science fiction then this is a definite must-read, especially as books for younger readers in this genre seem to be few and far between. Interestingly, when independent publisher Nosy Crow did a survey asking 6-9 year old boys what sort of things they really like, 'Outer Space' came third in the list, which leaves me asking why there aren't more books like Johnny Mackintosh around? This books follows the adventures of, yes you guessed it, Johnny Mackintosh. Johnny's life is not a particularly happy one at the beginning of the story as his mother lies in a deep coma in St Catherine's Hospital for the Criminally Insane and his father is locked away in a high security prison. Despite all of this Johnny is a pretty well-balanced boy, both sporty and intelligent enough to build his own computer, a device that he has programmed to search for signals from outer space. The detection of one such signal soon sees Johnny on the run from aliens, and journeying across the galaxies to strange worlds in search of answers to questions he never dreamed would involve him. This is a superbly written action/adventure story which I really believe could do for space stories what Harry Potter did for tales involving wizards and magic, if only it could find itself into the hands of more young people. If your son likes this book then rejoice as there is a sequel, titled Star Blaze,and the third book in the series, Battle For Earth, is due out at the end of the summer. 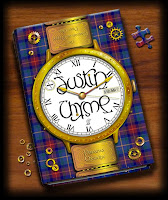 Justin Thyme: The Tartan of Thyme by Panama Oxridge

This is a book that I think is pretty darn special, and as with Johnny Mackintosh, I believe it is a book whose popularity would snowball if more kids got their hands on it. I first read it back in 2006, when it was self-published by the enigmatically named Panama Oxridge. For a number of years it was only available to buy second hand, often at silly prices, until newish publisher Inside Pocket released it last year. I still vividly remember the first time I read this book, wowed by its gorgeous packaging and illustrations within, and how I read well into the night, not wanting to put it down until I had finished it. Several readings later and it still hasn't lost its wow factor, and finally a sequel is due in October. Set in a Scottish castle, the story revolves around the titular character Justin Thyme, and his quest to solve a complex whodunit mystery. Littered throughout the story are a plethora of clues, both in the text and the illustrations, placed there by the author to help the reader solve the mystery. Although if, like me, you get so sucked into the story that you forget to look for clues, you may just find yourself reading again more carefully as soon as you have finished it for the first time. To give you an idea of how devious Panama can be, when he did an interview for The Book Zone the first letters of each of his replies to my 15 interview questions spelled "THYME RUNNING OUT", the title of that long awaited sequel. Naturally I spotted this immediately..... NOT! This is a book that will have boys (and girls) entranced for hours, and if you hear them giggling away to themselves they are probably reading about Eliza, a super-intelligent, computer literate gorilla who finds it amusing to go online to chat up boys!

Casper Candlewacks in Death by Pigeon by Ivan Brett

I know I said I would go for less obvious choices, and yes I did review this on The Book Zone earlier this year, but I still want to shout about it, as it is such a hilarious read and several months on it is still one of my favourite reads of 2011. It follows the adventures of Casper Candlewacks, the only person with any amount of intelligence or common sense in the village of Corne-on-the-Cobb. If you son has read and loved the likes of Charlie and the Chocolate Factory, Matilda, and The BFG then I guarantee that he will love this book as well. Whilst not yet as skilled in story-writing as Roald Dahl, this début offering from Ivan Brett shows so much promise that it is hardly surprising that so many reviewers mention the late, great RD in their reviews of this book. I was going through a somewhat worrying period of blogger-burnout earlier this year, struggling to 'get in to' most books and this was one of two books that cured me and lifted me from that dreadful malaise.

I bet this choice took you by surprise, yet why ignore the classics when choosing books for young people? After all, I have mentioned Roald Dahl more than once in this post but how many young people these days haven't read (or had read to them) his work? Surprising though it may seem I am sure there are many. Treasure Island is one of my all-time favourite books, both as a child reader and now as an adult. It has almost everything a child could ask for in a book: adventure, a quest for buried treasure, fantastic villains, and a boy hero who every child can relate to and would want to be. Hell, I know I wanted to be Jim Hawkins when I first read this book! Word of caution though – this is a book for confident readers as the language can at times be a little difficult, especially during lengthy passages involving lots of dialogue. However, for a book read by an adult to a child there aren't many others that would get my recommendation over this one. This is one of the books that created my life-long love of reading, and it is a book that I will probably read many, many more times throughout my life. I have recently received an e-book called Booksurfers: Treasure Island by David Gatward for my Kindle in which the author has crafted a brand new story that includes hyper-links that take the reader into the original RL Stevenson text – I am intrigued as to how this will work, but if it brings the classic story to the attention of a new generation of readers it can only be a good thing. 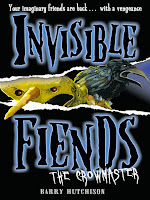 Aside from these above mentioned books, if parents were to ask me what they should get their reluctant reader boys as summer reads I would always advise them to buy (or get out from the libary) a few “first in series” books initially, as if they love one they will desperately want to read more. I did this a couple of years ago, buying my godson the first few Percy Jackson books – he devoured them whilst they were on holiday (as did his younger brother and his mother, each waiting patiently in turn) and now he totally loves reading. Series that I would highly recommend are the H.I.V.E. books by Mark Walden (fast-paced, exciting stories following the adventures of the pupils at a school for young super-villains); The Invisible Fiends books by Barry Hutchison (for 9+ boys who prefer their reading to be full of grisly horror you don't get much better than this series); and this may see me accused of stating the obvious, but if you are struggling to get your boys to read and you have not yet tried the Alex Rider books by Anthony Horowitz then get down to your local library now!


~~~
Thank you to Liz for asking me to write this for My Favourite Books, I really hope you find some of my ramblings useful in choosing books for your boys to read this summer.


~~~
I am just about to retire to my couch with my copy of Treasure Island because I've not read it for the longest time.  Thanks, Darren, for this awesome list of titles!  I am new to almost all of these you've mentioned and am feeling horrified and a bit ill - well, except for Percy Jackson and Alex Rider books, that is.
Who wrote this? Liz at 8:07 am

These books sound brilliant. I think I may be adding a few to my list for my next library trip.

Great book choices for boys! I would also recommend Young Samurai by Chris Bradford, the stories are so unique and engaging you won't get them to stop reading them. I just reviewed the first 3 Young Samurai on my blog and will be putting the next 3 up shortly. Thanks Bookzone!