Diary of a Lottery Winner's Daughter by Penelope Bush 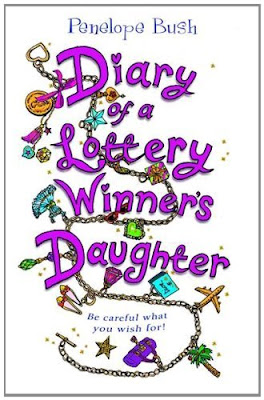 Does money have to change everything?


Charlotte and her family are determined that winning £3.7 million on the lottery won’t change them. But they haven’t counted on how everyone around them will react.


Charlotte’s best friend is acting strangely, and someone’s spreading cruel rumours at school. Can Charlotte use the money to change things for the better?

When we meet Charlotte (who I'm so pleased to say never is called anything but Charlotte) she is about to go on holiday with her mum and dad, her oldest sister Chelsea and Spencer, her older but smelly brother.  They are borrowing their aunt and uncle's caravan and heading to Weston Super Mare for a week's break by the sea.  We very early realise that Charlotte and her family aren't wealthy and that their house on one of the estates in Bristol is too small for them.  Charlotte has to share with Chelsea and everything about Chelsea is hard work.  She seems permanently sulky and miserable.  She kicks up a fuss about everything and makes her parents lives very difficult indeed.

Charlotte is sweet and kind and generous and she's a bookish kind of girl.  She is also quite small for her age.  She is about to turn 13 so finds it very difficult to relate to her older sister.  She is close to her brother, Spencer, which I quite liked and the two of them form a good unit and buffer against Chelsea's bad ways.

When they get back from their holiday Charlotte's mum has them stop at the local Tesco to quickly run in to do some shopping and to buy a new lottery ticket.  In the process of buying the new ticket, she finds the week before's ticket and when the staff check it...they advise her to ring the number on the back of the ticket.  She does when they get home and it's revealed that it is indeed a winning number.

Cue the dramatic screaming and shouting.  Slowly but surely things change for Charlotte and her family.  Chelsea starts househunting for them, Spencer who is clever and good at maths asks to be sent to a better high school and Charlotte, Charlotte asks for more books and some stationery.  A girl right after my own heart.

So, after the initial shrieking and the initial random clothes buying, what next? Life goes back to normal, really.  And that is what happens to Charlotte.  She goes back to school but she finds that her best friend Lauren is acting a bit standoffish towards her but she doesn't really think anything about it.   As the weeks go by, and her mum and dad reveal that they are moving into a new (older house) place, moving away from the estate, all that Charlotte can think about is: a room of her own and also floor to ceiling bookshop. And that is exactly what she gets.

Lauren's not at all happy and immediately makes friends with the new girl who moves into Charlotte's old house on the estate.  Chelsea is having problems too.  Suddenly the girls who used to hang out with her become antagonistic and fights start breaking out.

Charlotte becomes deeply upset when she realised that Lauren and the new girl, Stacey, have become good friends.  And they were basically freezing her out.  Annabel, a girl who lived near to Charlotte (someone she had seen in class but never really spoke to) starts speaking to her and before their friendship can really grow, it all goes wrong.

I enjoyed reading this novel - I thought that Charlotte's character deserved to have everything she wished for her and others.  She is honestly a nice kid and really likeable.  She's just not very adept at dealing with the real world, so that when the new girl Stacey takes advantage of her, she's so shocked that instead of telling her parents, she bottles it up and tries to work through it herself.  When she bungles telling Lauren, Lauren doesn't believe her.

Her fragile friendship with Annabel starts growing but things are falling apart at home.  Chelsea runs away from home after a bad fight with her dad and her parents start blaming themselves.  It's a complete nightmare.

As the story evolves and changes, Charlotte is a complete heroine and does her utmost to find and help everyone.   And of course, we are so vested in Charlotte's story, we can't wait for everything to be fine for her.

I thought that the writing was first class and the characterisation works very well.  The story and situations all make complete sense as they are super-believable.  It's not all sunshine and roses all the time, not even when you've won the lottery, as it brings its own ups and downs.

Diary of a Lottery Winner's Daughter is a fun read and it's given us a great new heroine who is just a tiny bit fabulous and cool, for all her geeky bookishness.  This is the author, Penelope Bush's second novel and I have to say...I think we've got a new voice for younger girls in the vein of Cathy Hopkins and Cathy Cassidy.
Who wrote this? Liz at 8:53 am

Sounds good. There is a message there, about fortune not guaranteeing happiness, but it sounds as if it's sufficiently well wrapped in story not to be preachy. Will look out for it.

This sounds great, Charlotte sounds like my kind of character!

this one sounds awesome must check it out! :D