Cave of Secrets by Morgan Llywelyn 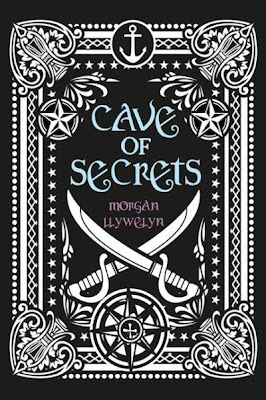 When Tom feels rejected by his father, he finds a secret second family among the group of smugglers who trade in and around Roaringwater Bay. Though Tom doesn't know it, his family in the Big House is under huge pressure. His father has had savage losses in business; his mother is always sad and worried, and his sisters have no hopes for a good future. This is seventeenth-century Ireland when cut-throat interests control everybody and everything, and land-grabbing is the order of the day. Friend turns into foe, and loyalty counts for nothing. From his new family, Tom learns all about boats and smuggling -- and secret treasure. And then Tom discovers the best-kept secret of all ...


This is my first Morgan Llywelyn book in a very very long time.  It is through Ms. Llywelyn's books that I sated my curiosity and thirst for mythic storytelling based around Irish sagas when I was in high school and before we moved to the UK in 2000.


When O'Brien Press asked if I would be interested in reviewing Cave of Secrets my jaw dropped.  Yes, I said, of course! I'm a big fan and I have to say, I still am, especially now that I've read Cave of Secrets.


Written for a younger audience, the writing is spare but lyrical.  We meet Tom who is utterly miserable - his dad is a very unpleasant towards him.  He brings gifts for his wife and dotes on heavily on his daughters and he sees very little good in young Tom.  Tom is quiet, unassuming and initially we think a bit of a sissy and gormless, but then he's never really had much of a life, cloistered in the big house on the hill with his close family, he's never run around and acted out.


Things change however when he by chance meets Donal as he's hiding in the cave he discovered by accident (he fell down the cliff!) to get away from his father's shouting.  Meeting Donal is the big change Tom's been waiting for.  He is soon roaming the beach with Donal, teaching himself to swim, and learning how different Donal's life is compared to his own.  Donal insists his father is a King and I loved his fiery temper and utter disdain for "soft foreigners", which, I think he initially counts Tom as being.  But Tom is a fast learner and soon he's gathering food from the shore along with Donal and his little sister, the irrepressible and very cute Maura.


Tom fits straight in with Maura and Donal and has the time of his life and soon he meets Donal's father and the man comes to admire Tom for his honesty and level-headedness.  Soon Tom is offered the opportunity to go out with Muiris (Donal's dad) and some others from their small clan, at night to relieve some ships of their cargo.

Muiris and his men are smugglers, hiding precious cargo to prevent it from being heavily taxed when it arrives in port.  Instead they hide the cargo in the caves and then it gets transported overland and sold at ridiculous amounts.

I know nothing of this period in history at all and found that Cave of Secrets was set so firmly in this era that by the end of the story, I knew quite a bit, but not because it was crammed down my throat, but because it was so integral to Tom's journey of self-discovery.

Set in the 17th Century it deals with the rumours of uprising against the King of England and the repercussions that faces Tom's family when his father makes a series of bad decisions or rather, decisions he thought would benefit his family, only to discover otherwise.

Cave of Secrets isn't really a big book by any means.  It packs a lot of wallop though, as it's a well written historical novel dealing with a period in English and Irish history few enough people I assume know very little about.  Ms. Llywelyn has a light touch, setting the scene and time period for us, and it never clutters the story.  Tom is a likeable main character and in the end, we are so keen for everything to work out for him.  The secondary characters don't blaze off the pages, except maybe for Donal and Maura whom I loved to bits, and the focus remains strongly on Tom and his family's predicaments.

It also does a bit of social commentary and contrasts well what Tom is used to living in the big house on the hill, compared to Donal and his family.  It also shows how, even though the Flynn's are minor gentry in their part of the land, as soon as Mr. Flynn gets to Dublin we see how he's treated without much respect, in direct contrast to how he's treated at home.

I enjoyed Cave of Secrets - it intrigued me and it's made me want to research this era more.  I'd recommend it for readers 10+ and definitely to those who like a smattering of history with their adventure.  The use of language is great, there are a few Irish words thrown in, but they are explained, so reluctant readers will definitely feel they've accomplished a great deal once they've finished reading it.

Find Morgan Llywelyn's link over here at the extensive O'Brien website and here is her personal site.  Cave of Secrets is available now in all good bookshops and online.

I'm intrigued. I loved the cover and the book sounds brilliant too.