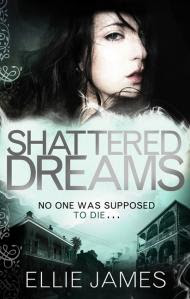 Trinity has never known who she really is. Strange dreams haunt her nights, and she has always been able to sense things that others can't.


When Jessica, the most popular girl at school, disappears, Trinity realises she will have to draw on her secret abilities to help find her.


Soon, Trinity is subject to visions that terrify her and make the police sceptical. As her dreams grow darker and the visions more frightening, Trinity realises she must risk her reputation and her sanity to save a girl who hates her.


Spoilers below and generally not a good review


Set in New Orleans, post-Katrina, Shattered Dreams is atmospherically well placed.  The empty homes of people lost during Katrina or who just didn't have the courage to return sets the scene wonderfully.  It will film beautifully and the novel put me in mind of Skeleton Key starring Kate Hudson.  There is the same bit of breathless anticipation that the film does so well.  The big set-pieces really encourage you to lean forward into the book, wondering what next, what next?

It made me sad though, that all these things Shattered Dreams promised through its premise just didn't happen.  Some of the descriptive, inner monologue parts about New Orleans is really well written, strong and self-assured and genuinely beautiful but then we come to Trinity, our main character and I honestly couldn't care less.  She comes across as a victim.  She is forever running away, tripping over and falling down and sobbing.  She never seems to move forward, towards things.  Admittedly, at the begging of Shattered Dreams I thought she had some cajones but sadly, as soon as she had to stand on her own two feet, she crumbled.  Especially when she was around the hot boy, Chase.

Trinity, our main character, is at one stage described through a set of natal chart predictions and I had to chuckle because the attributes they name is not at all what Trinity is about.

She has this gift, this curse, where she dreams and sees things and realises that they are invariably true.  She also has visions, waking visions.  The descriptions of the visions are confusing.  As they should be, as Trinity in theory shouldn't really know what's going on, but they are so confusing that initially I wondered if we dealt with an unreliable narrator (as Trinity is our narrator in first person past tense) but then I realised that the confusion is meant to help the reader be confused.

I didn't like that.  There is this one scene where she is with Chase, outside a house, and suddenly, Chase is just gone.  Cue Trinity dramatically running around trying to find him, begging people for help.  No one has seen Chase.  Then she wanders down a side-alley and is confronted by a mysterious woman who lures her into the house...where she has a pretty cool vision but then, suddenly, she screams and runs out of the house, into Chase's arms and he's there and tells her he's been knocked unconscious and his wallet stolen...and when he came to she was gone and he only found her because she screamed and ohmigod why are her hands bleeding?

So, with the Bad Girl Jessica's disappearance there is some research done and it turns out that at the time of Trinity's birth, girls had also gone missing.  And that Trinity's psychic mum helped the police try and sort it out...but that the police suspected her mum of being in collusion with the bad guy...but it was only when their house burned down, killing her mum and dad (a kind neighbour saved Trinity) that the police thought that maybe she had nothing to do with it after all and that there was some crazy person out there for real.

Fair enough, it makes sense.  Now they expect this bad guy to be back and targeting pretty girls, including Trinity.  Who is however a suspect as her she tells the cops about her dreams and visions and they think she is either nuts or in collusion with the bad guy.

And so it goes on and on.  The finale is not at all satisfying because when the bad guy is confronted he's just a random bozo...or is he??

The writing is uneven and jarring and Trinity, who could have been such a great character, is just weepy and annoying whilst Chase, the love interest has hints of mystery that we will no doubt get to explore in other upcoming novels, is just handsome and suitable to be sobbed against.

If it were up to me and I had £6.99 to spend on a book I'd rather spend it on something else.  Rarely have I read something that I so dearly wanted to love and in the end came to dislike intensely.  Hand on my heart, I'd say that this book should not have been a book.  It reads like a screenplay and it would film so very well and would probably work far better.   But if you're after YA Southern Gothic: go read Rosemary Clement Moore's utterly superb and deeply sexy The Splendour Falls or Texas Gothic.

Shattered Dreams is all twist windy and frustrating but not in a way that is satisfactory. Sadly not a book I can recommend wholeheartedly.
Who wrote this? Liz at 7:00 am

Eeep! And I really was looking forward to this one. I was intrigued by the inclusion of Hurricane Katrina in it.