The Boy Who Could See Demons by Carolyn Jess-Cooke 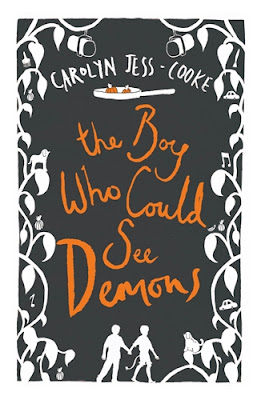 I first met my demon the morning that Mum said Dad had gone.
Alex Broccoli is ten years old, likesonions on toast, and can balance on the back legs of his chair for fourteenminutes. His best friend is a 9000-year-old demon called Ruen. When his depressive mother attempts suicide yet again, Alex meets child psychiatrist Anya. Still bearing the scars of her own daughter’s battle with schizophrenia, Anya fears for Alex’s mental health and attempts to convince him that Ruendoesn’t exist. But as she runs out of medical proof for many of Alex’s claims, she is faced with a question: does Alex suffer from schizophrenia, or can he really see demons?
The Boy Who could See Demons is a surprise find – I stumbled across it at Waterstones a few weeks ago and the sound of it really appealed to my random reading muse.
I didn’t recognise the author’s name although once I visited her site I realised she’d written the very well received The Guardian’s Angel which I did not read. I admit it: I was hesitant. I was uncertain if I would be able to cope with melodrama, (which I made up about the book in my head after seeing the Guardian Angel thing) but I closed my eyes, and settled in, and immediately found myself thoroughly drawn into Alex’s richly created world.
Alex’s voice is wonderfully clever, direct and fresh. He’s a young boy, ten years old and he has his own demons that he sees. Naturally no one else sees them which is awkward for Alex. Alex lives with his mum in Northern Irelandand let’s face it, he’s poor and not at all well taken care of. He lives off bread and fried onions and dresses eccentrically like an older man. He has no real friends and basically occasionally acts as his mum’s carer who in turn struggles with reality, drug addiction and depression. Ruen, his demon, appears in different guises to Alex and has told Alex he is there to study him. Alex allows Ruen to do this as he is so lonely, that a demon, a nasty piece of work, is better than not having anyone to talk to.
Things get out of hand though when Alex’s mum is taken to hospital after she attempts suicide and Alex is the one who finds her. In walks in Anya Molokova, a child psychiatrist who has been assigned to Alex’s case.
Anya has to be one of my all timefavourite characters I’ve read about. She is singularly smart, genuinely touching, logical, a bit dreamy but solid and firm in her beliefs. So much about her is what makes this book work. She is Alex and Ruen’s foil, she listens to Alex talking to Ruen and never ever talks down to him, which I utterly approved of. She’s intrigued by Alex’s case of seeing demons. She sees past the odd neurosis Alex displays and is determined to help him, no matter what.
As the story is set in Northern Ireland, there is quite a bit of background information about the Troubles and it was fascinating to read – for me personally as coming from South Africa, we never really learned about Troubles. Anya is curious about the odd behavior Alex displays because a lot of what she sees is usually related to someone whose been through the Troubles or has been through a severely traumatizing event. And yet there is nothing in the paperwork or story that they know about Alex, or his mum Cindy, that indicate that they had ever experienced anything violent.
The story is told from both Alex and Anya’s point of view and so neatly intertwined that with each new page, something new is revealed. Although the subject matter is dark and frightening and at times confusing (who do you believe? Alex is so sure he’s seeing this creature Ruen and other demons whilst Anya is so logical and clear about what she thinks is wrong with Alex) it is beautifully written, with sections of lyrical prose that lifts the heart.
I’ll make no bones about it, I cried towards the end of the book. I had so much invested in both Anya and Alex, I wanted things to work out for them both, but also, I didn’t want to say goodbye to them, because they had managed to get under my skin.
The amount of research the author must have done is staggering – not just about child psychology, but about the awful things that happened in Northern Ireland, and also thinking up Ruen and the other demons’ religious mythology.
There are a few genuinely disturbing moments in the book where I couldn’t quite believe what I was reading. It broke my heart, but then the author just went straight ahead and lifted me up again.
The Boy Who Could See Demons has been likened to The Curious Incident etc. but honestly, this is far far better. Alex’s voice is so pure, so utterly un-made-up and charming, I lost my heart to him. This is solid storytelling – a book that makes you think, but also a book that makes you cry and grin. I’m a fan, for sure, and I may even go and give that Guardian’s Angel book a try!
Find Carolyn Jess-Cooke’s website here, where your can also read an extract of TBWCSD.
Who wrote this? Liz at 9:00 am

Thanks for the review. I'm definitely adding this book to my list.

Far better than the Curious Incident? Well. Must read it then.