The Hum and the Shiver by Alex Bledsoe 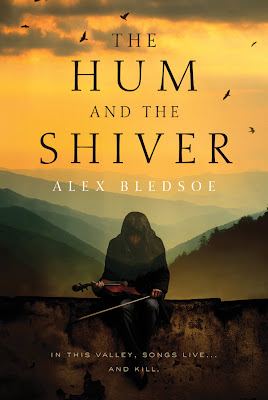 No one knows where the Tufa came from, or how they ended up in the mountains of East Tennessee.  When the first Europeans came to the Smoky Mountains, the Tufa were already there.  Dark-haired and enigmatic, they live quietly in the hills and valleys of Cloud County, their origins lost to history.  But there are clues in their music, hidden in the songs they have passed down for generations….


Private Bronwyn Hyatt, a true daughter of the Tufa, has returned from Iraq wounded in body and spirit.  But her troubles are far from over.  Cryptic omens warn of impending tragedy, while a restless “haint” has followed her home from the war.  Worse yet, Bronwyn has lost touch with herself and with the music that was once a part of her.  With death stalking her family, will she ever again join in the song of her people, and let it lift her onto the night winds?

I saw this book last year in Forbidden Planet and didn't buy it.  Then, we went for lunch, I left my friends at the restaurant and ran back and bought it.  I could not stop thinking about the write-up and the gorgeous cover.  I had to have it.

It has however taken me ages to get up the courage to read it.  I think, if you love reading, sometimes you have to let books talk to you when they sit on your shelf.  You have to be ready to read them - maybe like good wine or good cheese, you will know instinctively when the time is right.  I have a great many titles exactly like that, waiting for me to be ready to read them.

My time came last week.  In the sun, I sat and read The Hum and The Shiver and magic stirred the air around me.  Or rather, that's what it felt like.

I cannot adequately express how much I loved The Hum and The Shiver. The words lift off the page and weave images in your head.  The location of East Tennessee is described in lavish detail and although I have never seen photos of East Tennessee or of the Smoky Mountains, it feels like I spent a week there, living with the Tufa and getting to know them.

It doesn't take us very long to realise that we are dealing with a separate race of people here, the Tufa.  Not of any of the Native American tribes, not part of the influx of Europeans into the New World, the mystery remains as to who these people are.  They are media-shy, yet they do not hide, going about their business in a quiet way.  They are an attractive bunch, thick black hair, strong white teeth and good skin.  It sets them apart from those Europeans who came after and they aren't quite dark enough to belong to the Tribes.

From the first page we realise that the characters believe in Something Else.  They are perhaps superstitious and believe in ghosts, but there is a something else, just below the surface we aren't privy to.  Interestingly, the entire novel is told from within the Tufa life.  We have no outsider we shadow who tells us pertinent things.  It's entirely up to us to draw our own conclusions as we meet Bronwyn and her family, who are pure Tufa.  But things aren't made easy for the reader either.  We aren't given any further deeper insight into their lives because some things aren't explained because they expect people to know things instinctively.

In lesser hands, the story may not have worked, but Mr. Bledsoe trusts his readers to understand the game.  We are being told and shown a story, something very special indeed, and all you have to do is sit back and let it unfold around you.

Ultimately, the story is about Bronwyn.  She left Needsville and the area a young woman who made her fair share of trouble and broke a helluva lot of hearts.  She joined the army, did her basic, was shipped out to Iraq and came back torn and broken, hailed a hero by the media.  We are never really explicitly told what happened to Bronwyn over there - it's alluded that she saved some of her army buddies but was ultimately captured and tortured by insurgents.  And being female...well, you can imagine what was done to her.

Bronwyn comes back to Tufa country to heal.  The media are having a field day.  They want to glamourise everything she did, they want to make a big scene about her, but all she wants to do is run and hide somewhere.  Safely back on the family farm, Bronwyn is faced with the reality that someone in their family is going to die.  The omens all point to death and oddly, everyone assumes it's Bronwyn's mum who will die.  If that's the case, Bronwyn has a new role to fulfil, one she is reluctant to even consider.  She screams and fights against the inevitable, that she has to step outside her comfort zone, to become fully Tufa.  But things are never as clear cut as any of this.

We pick up secondary character's story strands and as it is all interwoven with Bronwyn's and her family's stories, we sit back and realise that what we think is going on...is only the smallest part of a much bigger picture.

I realise I'm being a bit naff in my review but I genuinely don't want to give bits away.  It's the kind of book that easily turns into a keeper, because the more you think about it retrospectively, the more you go "oh, I get it!" and then you want to re-read it again.  In fact, that's what I did.  I finished it on commute and then opened it at page one again and started my re-read of it.

The Hum and The Shiver is definitely one of my top titles for 2012, although it was released last year.  Bledsoe gives us a brand new world to play in, with strong characters and well developed mythologies that make 100% sense.  Effortless writing like this deserves to be shouted about.

You'll enjoy The Hum and The Shiver if you like novels by Neil Gaiman, Ben Aaronovitch,  Kate Griffin and Charles de Lint.  The Hum and The Shiver is not loud, it's not bombastic.  It's a quiet, powerful novel with a strong voice and has some beautiful writing. It's one of those rare things: a literary novel with urban fantasy undertones that sort of defies pigeonholing, apart from having to to be shelved under "A Damn Good Read".

Find Alex Bledsoe's site here and do go and read the first chapter here.
Who wrote this? Liz at 7:30 am

Email ThisBlogThis!Share to TwitterShare to FacebookShare to Pinterest
Labels: alex bledsoe, The Hum and The Shiver, Tor USA, urban fantasy

This is an extraordinary review of one of my favorite books. THE HUM AND THE SHIVER is indeed a whole new quiet and deep world for us to discover. Not only did I appreciate this review, I very much appreciate the reviewer.

Wow, this sounds amazing. Definitely on my must read list now.