The Bonehill Curse by Jon Mayhew 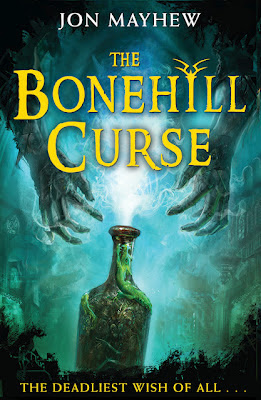 Necessity Bonehill is arrogant, a bully and trapped in Rookery Heights Academy for Young Ladies. Bored and aimless, she spends her time training with the retired, and slightly insane, Sergeant Major Morris or fighting with the local peasant boys. So when her Uncle Carlos sends her a seemingly empty bottle with the instructions, “Never open it,” she can’t resist the temptation and pulls the cork.


But Necessity unleashes an evil genie, a demon of pestilence and a creature that bears her parents a terrible grudge. With only seven days to rescue them, Ness has to find out how to kill the genie. She begins a desperate quest that takes her through the dark streets of London and to the Oasis of the Amarant in uncharted Africa. If she fails, her parents die and the world will fall prey to the genie’s hideous plague.

Firstly, let me just say that I know Jon through SCBWI British Isles and have known him for a few years now, since I joined the society, but this is the first book of his that I've read.  I have no idea why, because it's made me realise that Jon genuinely writes what old time reviewers would have called "ripping yarns".

I've come to Jon's Victorian world quite late, but I think for me, that I chose the correct book to start with.  I'm all about myths and legends and weird fairy tales and The Bonehill Curse is very much a fairy tale / fable AND it has genies in it, and references to Arabian Nights, which dear readers, is one of my desert island books.

Necessity, when we meet her, is not a pleasant girl.  She's a bully.  She picks fights. She's rude to her teachers and sees only how she is wronged by other people's deeds. She has, basically, a massive chip on her shoulder. We are left wondering why she's not a Nice Girl for only a short while.  We learn her parents have basically dumped her at Rookery Heights and not been in touch for around five years.  Her best friend is an elderly, probably insane, ex-army officer SM Morris, who teacher her to fight and shoot.

After an incident involving her beating up a boy at a local farm, Necessity is sent back to school, where she is given this mysterious old bottle from her Uncle Carlos.  Of course the instruction is to never open it, but that's like telling Pandora not to look in the box, and Necessity does open the box and before she knows it, her room-mates are all lying severely ill at her feet and she's being blamed for unleashing some awful pestilence. She also seems to have brokered a deal with the genie from the bottle.  And it's not the best deal she's ever made.

She runs for help to the Major but he tells her to leg it back to London, to find her parents.  She manages to leave, just as he's being captured by the local police and the officials from her school.

Things don't go well for Necessity in London.  Big things she finds out about her dad leaves her feeling ill and worried - is he really as bad as his old friends make him out to be? Slowly but surely the story is played out and we are sent off on various chases across the world.

My biggest relief though is how the story is wrapped up and also how well Necessity comes through her ordeal.  She has a great character arc that she goes through and at the end of the story, she's still bossy but she's become a more thoughtful person and her boorish bully ways are far less noticeable.  Needless to say, I'm really happy I've read Jon's book!

The Bonehill Curse is a fun action packed novel for younger readers.  I read it pretty quickly once I got stuck in.  The language Jon uses is easy to digest and the concepts and exposition is handled well - we get smatterings of biblical and Arabic lore thrown in for good measure and it all forms a neat little package.

I think The Bonehill Curse is suitable readers up to the age of around 12 or 13.  As I said, the language used is easily digestible and it will make confident readers think they've read a far bigger book than they had and similarly, for readers who are less confident, it will feel they've accomplished reading a pretty adept adventure.  I would dearly love to see Jon write for Barrington Stoke as his work and writing style lends itself well to the stories they enjoy publishing for less confident readers.

I'm a big fan of H Rider Haggard's books, having had my dad read them to me when I was growing up (and now having most of them on my kindle) and I think that basically, Jon's stories is a toned down version of Haggard's, more digestible and easier to relate to for modern young readers. And what I liked about Bonehill too is that he uses all the world as his plaything and that Necessity and her new friends come from all walks of life.

Be sure to check out Jon's website here and probably, unlike me, you'll want to start at the first book in Jon's sequence of novels.  But I'm a rebel, as you know, and never ever follow anyone's directions.

This sounds great. I read and loved Mortlock so I need to catch up :)

I'm going to have to take a look at this book. It sounds like an excellent read and definitely up my street :)