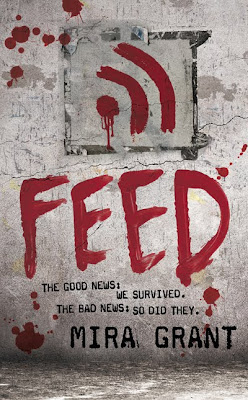 The year was 2014. We had cured cancer. We had beaten the common cold. But in doing so we created something new, something terrible that no one could stop. The infection spread, virus blocks taking over bodies and minds with one unstoppable command: FEED.

Now, twenty years after the Rising, bloggers Georgia and Shaun Mason are on the trail of the biggest story of their lives – the dark conspiracy behind the infected. The truth will out, even if it kills them.
..

After sitting here at the table, staring at my slightly battered copy of Feed I’ve come to the conclusion that’s it a bit tricky to sum up. It’s got zombies, but it’s not an out-and-out zombie survival or dystopic setting. It’s got politics, intrigue and betrayal, but it’s not a politicial drama. It’s somewhere in between.
In the world inhabited by the main characters, Georgia and Shaun Mason, much of the world remains a no-go, zombie-infested no man’s land. Civilisation has made a comeback following the spread of the lethal, zombifying Kelis-Amberlee virus along the periphery of these areas, closely monitored and patrolled by the reborn government (just imagine health and safety given free reign -and guns).

Traditional news sources lost their power and following after their ineffectual and censored coverage of the initial outbreak, when only bloggers (go us!) and the likes of twitter got the message across that these weren’t drug addicts (bath salts, anyone?) or a cult or terrorists. Suddenly Romero’s zombie trilogy became educational material, studied by the army and police.

Shaun and Georgia run a news blog, one with a good reputation, and are both zombie-savvy and wise to how their world works; growing up in that kin d of environment doesn’t leave much room for unicorns and glitter. Their big break comes in the shape of being chosen to cover one of the presidential hopeful’s campaigns, gaining them unprecedented access to both the senator and the behind-the-scenes workings of their campaign. They and their cynical, self-promoting parents are equally delighted and things get off to a good start as the story gains momentum. Mira Grant does well to flesh out the background of ‘the Rising’ and the nature of the zombie virus, the latter doing a very effective job of raising the threat posed by the zombies over and above the usual shuffle-and-bite fare, and does all this without interrupting the flow of the story (most of which comes from Georgia’s first person perspective). The way that the nature of the zombies and the virus at the root of the problem are presented makes that crucial suspension of disbelief so much easier to achieve and makes Feed maintain it’s ‘grown up’ fell even while zombies are moaning and marauding across the pages.

Things start taking a more exciting turn as the campaign starts suffering zombie flavoured acts of sabotage, and as the bodycount climbs they become aware that they too are in the conspirators’ sights, and their only hope of maintaining their lives and integrity is to unearth the truth.

Feed is punctuated by excerpts from personal blogs, mostly Shaun and Georgia’s, which blends in nicely with the story and also gives it a bit of extra ‘breathing room’, letting Mira add an extra angle on events and the characters’ backgrounds outside of Georgia’s sole perspective.

I really enjoyed this- the writing and the characters are solid, the setting is believable and well thought out as are the action sequences. There’s no such thing as ‘just another zombie’ here – they’re all walking, single minded virus incubators and dangerous in more than just one way.

I’ll freely admit that I was a bit hesitant at first, but I was firmly hooked before very long and, importantly, Mira made me care about the characters. Taken together with the no nonsense approach to the zombie virus, Feed stands out as an intelligent and captivating take on life after the zombie apocalypse and one that I will happily recommend to anyone looking for something fresh and gripping.