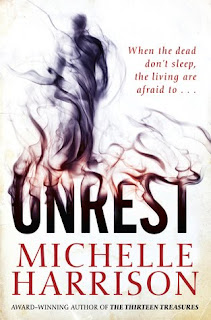 Synopsis
Seventeen-year-old Elliott hasn’t slept properly for months. Not since the accident that nearly killed him. Sometimes he half-wakes, paralysed, while shadowy figures move around him. Other times he is the one moving around while his body lies asleep on the bed. His doctors say sleep paralysis and out-of-body experiences are harmless - but to Elliott they’re terrifying.

Convinced that his brush with death has attracted the spirit world, Elliott secures a job at a reputedly haunted museum, determined to discover the truth. There, he meets the enigmatic Ophelia. But, as she and Elliott grow closer, Elliott draws new attention from the dead. One night, during an out-of-body experience, Elliott returns to bed to find his body gone. Something is occupying it, something that wants to live again - and it wants Ophelia, too . . .
I don't think it's a secret that I'm a huge fan of Michelle Harrison's books. However, I'm also a terrible scaredy cat so I waited for a nice, bright summer's day (well, sort of summer) to sit down outside and open Unrest. The cover itself is enough to scare the hell out of me with it's browning edges and ghostly figure. However, Elliot has such a distinctive voice that I was hooked in the first few pages. The book starts with an account of his sleep paralysis, out of body experience and a haunting. We start to get to know post-accident Elliot and discover that he's nothing like the confident person he was before. All his previous interests have gone out of the window, he's not eating, sleeping or even washing. He certainly is a tragic figure but although all those around him are looking at him with pity I think the reader can tell that the fight is still inside him - just a hint of the person he once was.
Deciding that he doesn't want to return to college until the next year he gets a job, one that should bring him into contact with ghosts. His theory is that if he sees ghosts anywhere other than his flat then he can start to get a handle on what's going on with his life. He gets a job at a living museum and enters real life for the first time in months. However, it soon becomes apparent that his boss Hodge is seriously unpredictable and prone to fits of anger. His adopted daughter Ophelia is an enigma who draws Elliot's attention. He's not had any interest in girls for months but there's something about her that attracts him. Her previous boyfriend, Sean, ran out on her but she's being plagued by his friends and family wanting to know where he's gone. Ophelia and Elliot are thrown together by escalating events - I was a hundred percent loving their relationship. There are some seriously wonderful kissing scenes in this book. I think these two are my favourite couple of the year.
Unrest is non-stop action from beginning to end. Elliot can step out of his body but doing this means that his body is unguarded so when he returns to find his body gone he realises that he needs to find out more about his talent and quickly. The hauntings are incredibly atmospheric and creepy. I could feel his terror during his sleep paralysis. Little by little Elliot starts to gather his life back together again and part of this is accepting that he won't be the same person he was before. In terms of emotional arcs this one is particularly satisfying. Elliot's in such a low place at the opening of the book that it's almost impossible to see how he's going to get out of his slump. The secondary characters are all wonderful too - Hodge is deliciously awful but I also loved Elliot's dad and brother.
I'll stop now before I gush too much. Just to say that I did not see the twist at the end coming. Unrest is wonderful with a great main character - I urge you to read it!
Who wrote this? Essjay at 7:30 am

This sounds so brilliant! I think I have it waiting on my TBR pile, must check and move it closer to the top :D

I love a good gushy review :) And I'm with you on this one, utterly loved it!

First book from the author and LOVED it!