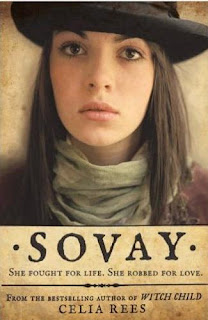 Synopsis: Set against the backdrop of the French Revolution and its impact on British politics, this action-driven novel shows once again that Celia Rees is one of our very best writers for teenage readers. Wild and beautiful, spoilt and wilful, Sovay finds that her cosseted life in rural England has not prepared her for life as a highway robber, for defending the honor of her family or for trying to save herself from corruption and evil. As Sovay becomes more and more embroiled in adventures she could scarcely have imagined, a story of dark intrigue, thwarted passions and sinister intentions is revealed to her. Will she be able to survive, and if she does so, at what cost?

Firstly, I am a huge fan of Celia Rees. My first book I picked up of hers was Witch Child and I have been a fan since, having read Pirates! and various other offerings by her in the past.

Which makes Sovay a real treat for me. The book is tactile and beautiful to look at and to hold because of the hardback cover being a thick rich parchment type paper.

The story promises a lot. It delivers intrigue, danger, shocks, dashing men in masks, spying and generally a lot of adventure.

Celia Rees uses her tremendous skill to give us a glimpse of what it was like living in London during these troubled times. Through Sovay we discover how dangerous it is to speak your mind in times as fragile as this where there are so many factions at work. A criticism spoken to the wrong person, could lead to charges of treason. No one is safe. There is an air of menace in Sovay which makes it not a very comfortable read, to be honest. But it fits completely with the story itself and it enhances beautifully how dangerous life can be once you are exposed to the dark elements of having to live life to the best of your ability even if it goes against what everyone else from your world believes it should be.

The story highlights the grand divide between those who grow up privileged and those who have practically nothing except their own luck and intelligence. It is written as a rich tapestry and we watch Sovay grow from a petulant, spoilt little girl who acts out of spite, into a confident young woman with a strong loyal character and a circle of friends who are, at some instances, dubious at the best.

It is a thrilling breathtaking read, with engaging characters and like in Pirates! Celia Rees breaks the mould for historical teen / young adult novels in setting up a young woman against the odds by throwing every mean thing at her, to see how she responds. Sovay’s story brings history to life and it makes you realise that the characters you get taught about in school were once upon a time, real people with hearts and souls of their own, who acted the way they did because they needed to survive the circumstances.