Triskelion by Will Peterson 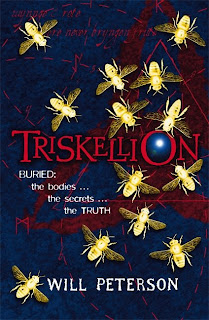 Twins Rachel and Adam are sent to stay with their grandmother, following their parents' divorce. But the quiet English village is a sinister, unsettling place. Is there a dark heart beating beneath the thatched roofs of Triskellion?

It is a place protected by an ancient, three-bladed artifact; a village where crops never fail and where the war memorial is blank; a community with much to protect.
With the help of the mysterious boy Gabriel, Rachel and Adam begin to unearth centuries-old secrets and make a shocking revelation about their family’s past – and their own future...

I read Triskelion in one sitting. I started it Sunday morning at breakfast (herb and cheese scones!) and I took it with me when we went into Beckenham for our usual Sunday afternoon session of lazing in a coffee shop, to either read or write. I had become totally immersed in Rachel and Adam’s world and couldn’t bear to not have the with me – I had to know what happened. I finished reading it at around 7pm last night. Fantastic thrilling stuff. So – this is my review:

Because Rachel and Adam’s mom could not deal with both of them at the time of the divorce going through, she sends them from the New York, to live with their grandmother (in the UK) whom they don’t really feel comfortable with, as they don’t really know her.

The village of Triskelion is an enigma, appearing deserted when they first arrive on the train from Paddington. No one is there to collect them, but there are bicycles left at the station with their names on them. They cycle through to their gran’s cottage, following the instructions on the note left for them. But they stop in the village itself for a break and soon come to believe they are the only people in the village – there is no sign of anyone about on the streets or anywhere. The feeling of unease creeps up on you and you feel like encouraging them to get on their bikes and leave, back to the station they just came from. But, shouting at characters in a novel will get you arrested in a public, so I didn’t shout out loud.

Things go from creepy to worse when there is a run-in with two local thugs who beat up Adam and then pull a disappearing act. They eventually make it to their gran’s cottage and although they still don’t feel like they are home, they do think they are safe.

Rachel and Adam are introduced to a range of people from the village and the mysterious boy Gabriel makes his appearance the night of a tremendous thunderstorm, walking the chalk outline of the triskel that is visible on the hill outside of the village. There are many rumours about the triskel and the name of the town itself (Triskelion) which relates to the eye within the triskel.

The dark and pervasive mood stays with you throughout the book. As it is, the novel is set during the school holidays when the days are so hot and overbearing you can barely think straight. All of this enhances the feel of the novel and helps create the explosive feel of the writing. The fact that the village adults are portrayed in a candid way – they do not like the twins snooping about the town. They do not appreciate incomers. They want things to stay as they are, to retain the status quo. In Rachel and Adam they see change, the world outside of their village, and it’s not something they want to embrace.

I enjoyed seeing the strangeness of village life through the children’s eyes. As they are from America there are many things that would be unusual for them, for example, the Sunday afternoon cricket on the village green is odd, there is no internet café to use to email their mom, there is no mobile signal so they can’t phone her either, everyone knows everyone else’s business. They are isolated, in a village where they don’t feel safe and where secrets are simmering just below the surface.

The archaeological dig that comes to the village, to dig up what is assumed is a Bronze Age burial mound, stirs things up even more. More incomers, this time with TV cameras and what they find in that dig, pushes the village that one iota too far. The repercussions of the find has a knock-on effect within the village; people come to realize that what they had thought was the luck of the area, was in fact, a lot more than that. And how far would you go to protect the status quo?

The novel is an excellent piece of work, with two interesting and strong characters as leads, whom almost everyone will be able to identify with. The kids go through some awful things in pursuit of the truth and you cheer them on wholeheartedly in their quest. As the novel races towards its conclusion – and it is a race – the actions of the villagers are highlighted as they decide to take a stand either for or against one of the two factions that have risen up within their midst.

It is a powerfully written piece of work definitely for slightly more mature, more confident readers. I would highly recommend it as a read – it explores wonderfully the relationship between the twins and highlights that special gift so many twins seem born with. I was thrilled to learn, when I visited the publishers’ site, that the next installment of Triskelion is due for release this March with the third installment of the trilogy available in 2010.

Find the mini-site put together by Walker Books here.
Who wrote this? Liz at 6:15 am

Hi just to let you know that the 2nd triskellion book is already out my daughter and I bought it in the bookshop last week.

i have only just started reading triskellion by will peterson .my sister bought it for me at a booksale and allready i am in love with the book i cant wait to finish it to see what unravells in triskellion

great book i canot wait to get the second book

i just finished the book and thought it was amazing looking forward to read book two :)

I just started reading this and its awesome!!!