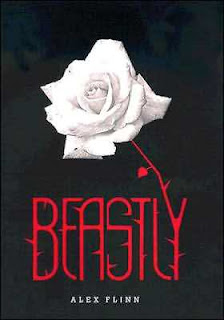 I am a beast. A beast. Not quite wolf or bear, gorilla or dog, but a horrible new creature who walks upright – a creature with fangs and claws and hair springing from every pore. I am a monster.

You think I’m talking fairy tales? No way. The place is New York City. The time is now. It’s no deformity, no disease. And I’ll stay this way forever – ruined – unless I can break the spell.

Yes, the spell, the one the witch in my English class cast on me. Why did she turn me into a beast who hides by day and prowls by night? I’ll tell you. I’ll tell you how I used to be Kyle Kingsbury, the guy you wished you were, with money, perfect looks, and a perfect life. And then, I’ll tell you how I became perfectly beastly.

You are right about the while girls swooning at Alex Pettyfer's feet, because he is just far too gorgeous for words. I have a major crush on him like i'm a bloody teenager.

I started reading this book a while ago, i've had it for quite some time, before I even know the film was in production. I didn't finish it though, I just seem to have got waylaid and never went back to it. I think I need to though, because you make this book sound amazing. Its really suprising what a review can do for a book, because if it wasn't for this, i'd probably just forget about the book and watch the movie instead, so thanks!

I adore this book. I'm so glad you loved it as well. I was so caught by Kyle/Adrian's transformation and how unique and unusual Lindy was as the Beauty character. Things were more . . . equal somehow, you know?

I have ordered this! I hope you're happy ;)

I was pretty excited about the movie and though I was planning on reading the book beforehand...your review (which was fantastic btw) has got my butt in gear. I've ordered this book! Thanks for the wonderful, in-depth review. I enjoyed it heaps!

Charlotte here, I just wanted to say to A L L who reads your blog, that the book is amazing, it's fun, and tarrific written!
You'll fall in love with Kyle, he's an amazing person and a beast all the way trough! It's really just amazing!