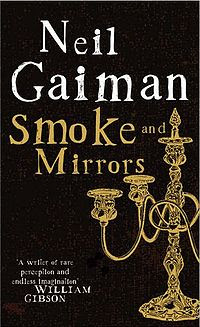 Mrs. Whitaker found the Holy Grail; it was under a fur coat.

In Chivalry by Neil Gaiman from his anthology Smoke & Mirrors, we meet Mrs. Whitaker, a lonely widow, with no children of her own. We assume she leads a quiet and uneventful life - she collects her pension, visits Oxfam to buy various bits of bric a brac and the occasional Mills & Boon novel for a few pence. She has tea with an equally elderly lady and visits a friend with a damaged hip in hospital. She is unremarkable in every way. An elderly person none of us would like twice at.
Yet, she manages to find the Holy Grail in Oxfam. Her reaction is one of quiet surprise and she buys it, along with two M&B novels and she takes it home, where she washes out the red dusty stuff in the cup (!!!) and then lets it soak for a bit, before polishing it to a high sheen. She places it on her mantelpiece along with an old photo of her husband (now deceased) and a small soulful china basset hound.
Sir Galaad appears at her door, a knight in shining armour, on a Right High and Noble Quest, to procure the Holy Grail. Behind him his giant horse is tethered to her gate. Mrs. Whitaker takes to the young man, but only after she sees his credentials to make sure he is who he is. Sir Galaad spots the Holy Grail, the Sangreal, and begs Mrs. Whitaker to let him have it. She refuses. She is kindly but refuses.
Galaad visits a few more times. He offers her an amazing sword in return for the cup but she turns him down. He visits again, and he is a bit more battle weary than before. This time around her the Philospher's Stone and the Egg of a Phoenix. But he also offers her the Apple of Life. As Mrs. W holds the apple in her hand, some of the juice leaks onto her fingers and she licks it. She remembers what it was like being young, being married to her husband and to feel the eyes of handsome young men on her. She carefully places the apple back down, handing it back to Galaad. She gives him the grail and keeps the egg and stone, replacing the grail on the mantelpiece.
Galaad rides off on his giant horse, still a paragon of beauty and youth, grail quest fulfilled. Mrs. W visits Oxfam again shortly thereafter and notices that the young girl behind the till was no longer in attendance. Turns out she had run off with some handsome youth on a horse. She smiles to herself and putters around the shop and finds an ancient looking lamp...she looks at it carefully, considers it. Then puts it back, only buying the single paperback romance novel.
Wonderfully descriptive, this has to be one of my favourite shorts by Mr. Gaiman. It is humorous and filled with pathos. Overall it works so well as a keyhole view into the life of a solitary elderly woman who is, despite her advanced age, still very able, still very much aware of a bigger picture, even if she lives a small life and has become all but invisible to everyone else.
Sweet and hopeful this short story never fails to make me smile. Definitely a favourite and one that I enjoy re-reading for the sheer pleasure of the storytelling and tongue in cheek humour.
Who wrote this? Liz at 8:58 am

If ever there could be such a thing as a 'perfect' short story, Chivalry would be it. :)

I ADORE this story - it's utterly delightful and poignant and says *so much* in so few pages, about hope and despair and joy and loneliness and Carrying On and ohhh it's just so wonderful, I'm incoherent with love. *beams*

It's the first story in Angels and Visitations, and it really sets the tone for What Neil Is All About, being both humourous and sad, and mixing great quests with the most ordinary of lives. It is Pure Neil and is one of the many reasons why I've been in love with his work for twenty years. :)

I'm not usually one for short stories, but this one sounds like a good read! I like things that can be both a little upsetiing and humorous.

I adore Neil Gaiman! Smoke and Mirrors is one I haven't read though, I've always heard good things about it. Maybe it's time for me to pick it up! Thanks for the review of this short story..