The Non-Event by Mike Carey from Masked, edited by Lou Anders (SSM) 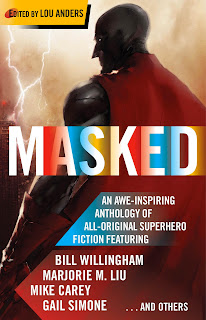 Superheroes have come a long way since the "Man of Steel" was introduced in 1938. This brilliant new collection features original stories and novellas from some of today's most exciting voices in comics, science fiction, and fantasy. Each marvelously inventive tale shows us just how far our classic crusaders have evolved—and how the greatest of heroes are, much like ourselves, all too human.

As a big fan of comics and to a lesser extent superheroes (I'm just weird that way) I became very excited when I saw that Lou Anders was releasing an anthology called Masked. I became near hysterical when I saw the line-up contained within: Liu, Chadbourn, Willingham, Simone, Carey, Cornell, Sturges. My gods man, it was like a geeky wet dream.

I read Mike Carey's The Non Event over breakfast this morning. We are introduced to the tough talking Lockjaw who relates to us a story of a robbery attempt in London of the DeJong's bank on Aldwych. A handful of superpowered humans decide to stroll into a vault and empty out a lot of its contents, jewellery, bearer bonds, gold bullion etc. To fight their way clear of the superpowered cops and heroes who would no doubt answer the silent alarms.

It's a bit Oceans 11 without such a big cast and without Danny Ocean's charisma. Lockjaw's voice is matter of fact, veering into dislike and bitterness on occasion as he recounts how he agreed to bring in Gallo, the man he subsequently shot dead at the scene of the crime. We learn how they get into the vault, we learn how the almost pull it off and get as far as the main bank foyer when things go more than just pearshaped.

I liked the The Non-Event as Carey brings home the difficulty of being a superhuman with powers, using Lockjaw's stark retelling of the botched burglary attempt to reflect on how one small action, one of their number, tripping over a bucket and broom, completely changed how the entire game should have played out. How one thing managed to escalate the action into a truly unpleasant event with a very unpleasant outcome.

Sad, poignant and thoughtful, The Non Event is summed up by this excellent phrase on page 81 of the anthology: "Funny, huh? How you can be dead and buried and still keep right on walking, not knowing you took the hit."