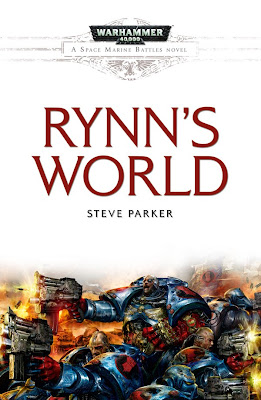 The Space Marines of the Adeptus Astartes are fearless champions of humanity. Genetic modification and psycho-conditioning has made them superior to Men in all respects. These Superhuman weapons of war are mankind's most elite fighting force, and as such, their battles are iconic tales of xenos purges and desperate last-stands. Their deeds have become legendary, and the Space Marine Battle series recounts their most notorious front-line stories of heroism in graphic detail.

When the Ork hordes of the Warlord Snagrod, Arch Arsonist of Charadon, lay waste to the planet of Badlanding and devastate the Crimson fist forces sent to stop them, Chapter Master Kantor is forced into a desperate defence of the Fists’ home planet, Rynn’s World.

Tragedy strikes. An errant missile destroys the Space Marines’ fortress-monastery, killing most of the number outright. With a handful of battered survivors in tow, Kantor must cross a continent and reunite with his Second Company if he is to have any hope of defeating Snagrod’s orks and preventing his Chapter’s total annihilation.

Rynn’s World centres on the Crimson Fists’ desperate battle to defend their homeworld against the planetary assault launched by the devious Ork warlord Snagrod, a cunning adversary that will give them and the Imperium a shattering and unforgettable lesson in the dangers of underestimating your enemy.

The viewpoint is shared between several of the Space Marines, with the lion’s share split between the hot blooded Captain Cortez and Kantor, the beleaguered Chapter Master who must bear the burden of his devastated Chapter and a ravaged homeworld. This approach works as the Marines are scattered in the wake of the disaster that befalls their fortress and as the true extent of the Ork assault becomes evident.

To be honest, Cortez and Kantor’s characters aren’t perhaps as developed as you’d like them to be, but this is more than compensated for by the visceral, bonesnapping action that erupts as battle is joined and the surviving Marines give vent to their burning need for vengeance. It’s good to see an author showing Space Marines’ abilities off – sometimes it feels that some people gloss over their decades of training and the fact that they are deadliest warriors mankind has ever fielded. Cranium shattering headshots are de rigueur, and bolter shells rupture torsos and sever limbs by the score. I particularly enjoyed the descriptions of the close combat – it’s one thing to say that an Ork is put down with a powerfist, but when you start describing it as an uppercut it opens a whole new box of images and gives a far more satisfying idea of how that Marine is fighting.

Rynn’s World is part of the Space Marine Battles series, and it certainly does exactly what it says on the box- it's 536 pages stuffed full of explosive, graphic action and Space Marines doing what they do best.

And most importantly, it's damned fun to read.

Space Marines, you've got to love 'em. I'm more of a Blood Angels fan myself. Mainly because they're vampires. They get everywhere, don't they?