Vampirates - Demons of the Ocean by Justin Somper 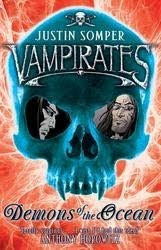 Synopsis:
Connor and Grace are twins, recently orphaned after their widowed father's death. Rather than being adopted by the town's busy-bodies, they decide to set sail for new pastures in their father's last single possession, his sailing boat. But a vicious storm sees their boat capsize and the twins separated. Two mysterious ships sail to their rescue - each picking up one twin before disappearing into the mist. Connor wakes to find himself on a pirate ship and is soon being trained up with a cutlass. Meanwhile Grace finds herself locked in a darkened room, as the vampirates await nightfall... Determined to find each other, yet intrigued by their new shipmates, the twins are about to embark on the biggest adventure of their life...

I'll make no bones about it. Vampirates surprised me. I actually told Mr. Somper's publicist this. I fully expected to be dragged into a book full of tongue in cheek pantomime escapades and high jinks. It would have had a big thumbs down from me if it had but I couldn't have been more wrong. Thank Poseidon!

Demons of the Ocean is the perfect primer for the rest of the Vampirates books. We are introduced to the twins - Conner and Grace - and shown their unusual upbringing by their father. a lighthouse keeper. When he passes away the twins are thrown at the mercy of the town they live near to. But instead of conforming to go and live with the wealthiest banker in the town or opt for the local orphanage, the twins decide to take their fate in their own hands. They steal their father's ship (which had become the property of the bank, as the dad had been declared bankrupt) and head out to sea.

An unexpected storm sweeps in, capsizing the twins and breaking their ship apart. Connor watches in amazement as this illusion of a ship nears out of a dank fog cloud, seemingly floating on air. He watches it come round, near him, then disappear. Shortly afterwards he's rescued by a young female pirate, Cheng Li and taken on board The Diablo where Captain Molucco Wrathe holds ultimate sway. Connor is distraught over his sister's disappearance, did she drown or has she been taken by the mysterious ship he saw whilst clinging to a rafter in the storm-tossed sea?

Connor makes friends with the much larger, more confident Bartholomew and (Cutlass) Cate and swiftly takes to pirate life. He's a natural athlete and easily enough picks up dueling skills. But something at the back of Connor's mind holds him back - the thought of murdering people for their rightful belongings seems wrong to him. This is a very interesting internal struggle and it's never over-played. I found myself very intrigued by Molucco Wrathe and the rivalry he has with Cheng Li, his deputy captain. She's the new type of pirate, the one who wants to follow the rules as set out by the Pirate Academy. Molucco is more the wild child, not liking rules and regulations. His crew loves him and he has a reputation of being a pretty bad man. Very little of this is shown to us in Demons of the Oceon, but it is implied in other pirates who come into contact with them. It's a very cleverly written piece of work.

Grace has of course been rescued by the mysterious ship. Her saviour was the deliciously sounding Lorcan (whom I developed a tiny crush on). Grace's part in this book is not a very active one, for a start. Things are happening to her. She's been taken on board by the dreaded Vampirates ship. For most of the part she feels helpless. Left in a lovely cabin, fed gloriously delicious food, with only Lorcan as her "outside world" contact, Grace is going stir-crazy. She hears music, people talking...but is not allowed outside her cabin. The mysterious Vampirate Captain speaks to her in her mind, urging her to stay calm, that all will be well, that nothing bad will happen to her. But Grace isn't the kind of girl who takes easily to being passive. She wants to find Connor, she wants to know if he's safe, she wants to figure out why she's been brought on board, she needs to figure out what's going to happen to her. A whole boatload of questions await.
Vampirates - Demons of the Ocean is a very chunky, very filling read. It felt like it's an origin story. It's laid the foundations very solidly, introducing us to a small cast of characters who felt very real and well thought out. I am starting book 2 this weekend and am feeling impatient about it. This is a good sign.
Find the official website to accompany the books here: http://www.vampirates.co.uk/

Below are my "Three Questions with Justin" to accompany each review for his Vampirates sequence.
1. Why did you decide to write for a younger audience?

I'd written for this younger audience before and find it comes pretty naturally to me. But overall, the audience I write for is dictated by the ideas I get. When I had the idea for VAMPIRATES - which arrived as a bit of a "Eureka!" moment - I realised that there would be a number of possible ways to tell the story and a diverse range of audience to do it for. With this idea, I knew from the start that I'd have more fun if I wrote it primarily for a younger audience (though I do seem to have picked up a few adult fans along the way).

2. What came first? The two characters, Connor and Grace or the overall story?

First came the word... VAMPIRATES. Then the shanty. Then the characters and then the story. The characters of Connor and Grace were quite sketchy at first, Connor especially. I think both have developed a lot as I've continued to write about them and from their perspectives. I certainly feel that I know them a lot better now.

3. How much research did you do into piracy, sword fighting, captaincy and rules of the sea (I’m tempted to say “arrrrr” here, but I won’t) oh, and of course, (vam)pirates?

I did loads of research ahead of writing DEMONS OF THE OCEAN. This was necessary as I knew very little about vampires and next to nothing about pirates when I embarked on this voyage. So I delved for some time into pirate history and vampire myth. On the whole, the pirate history was more useful. For instance, I found out that Julius Caesar was once kidnapped by pirates and was able to use this as Sidorio's "origin story". I did also get some advice regarding swordfighting - in fact, the character of Cutlass Cate began as an homage to the woman who helped me out with this. Some of the vampire research was helpful but at some point it was clear that I'd have to decide which myths to work with and which to leave aside. As I've gone on, there's always an element of research to writing - whether it's developing new characters or settings, finding out about new weaponry or, in the latter books, wine terminology. Thankfully, with wikipedia and the like, it's easy to research stuff quickly without having to leave my base.
Who wrote this? Liz at 9:13 am

Email ThisBlogThis!Share to TwitterShare to FacebookShare to Pinterest
Labels: author of the month, justin somper, Simon and Schuster

I'm glad you enjoyed this Liz - I did too!

I've never come across anything like pirate vampires before, so it was cool to read a fresh idea. Hope you enjoy the next one!