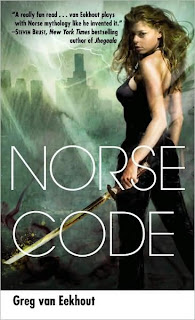 The NorseCODE genome project was designed to identify descendants of Odin. What it found was Kathy Castillo, a murdered MBA student brought back from the dead to serve as a valkyrie in the Norse god’s army. Given a sword and a new name, Mist’s job is to recruit soldiers for the war between the gods at the end of the world—and to kill those who refuse to fight.

But as the twilight of the gods descends, Mist makes other plans.

Journeying across a chaotic American landscape already degenerating into violence and madness, Mist hopes to find her way to Helheim, the land of the dead, to rescue her murdered sister from death’s clutches. To do so, she’ll need the help of Hermod, a Norse god bumming around Los Angeles with troubles of his own. Together they find themselves drafted into a higher cause, trying to do what fate long ago deemed could not be done: save the world of man. For even if myths aren’t made to be broken, it can’t hurt to go down fighting…can it?

It's taken me ages to review Norse Code. I know, it's bad of me, but in my defense, it's because I've read it twice more then lent it out to someone else to read.

I've not read anything quite like it before. It's a pure homage to writers and stories of a bygone era. I loved it. It's a bit Odyssey, it's a bit Beowulf, it’s a story about a broken world, and it’s also a story that’s packed with hope adventure and excitement. In other words, it's all it's own creation. Mist is a strong female character and although she kicks butt, her character is not over the top, mouthy or unpleasant to be around. She’s a tough girl and the thing is, she doesn’t have to act out to show this. She wouldn’t have been chosen as a Valkyrie if she was a milksop.

Greg van Eekhout's writing is solid and effortless. He tells the story of Mist, a Valkyrie, whose job it is to collect brave warriors to fight on the side of the gods in the war between the gods...and those who decide not to fight, she has to kill.

The world that’s been created by Mr. VE is an interesting one. It’s light on science fiction rigmarole, heavy on plot and adventure, and character too. It introduces the Norse gods like you’ve never seen them before - scheming, amusing, devious - a true family trying to come to grips with the destruction of the world(s) and their roles within it.

Mist’s quest to find her sister (who died, but who was supposed to be the real Valkyrie as she was the fighter, the warrior) is a deeply emotional journey. Along the way she starts a rebellion, asists in overthrowing the way things are supposed to be done and thwarts other Valkyries from carrying out their goals. In other words, she does what a true rebel does: she becomes a nuisance.

I’m a fan of dystopian novels - I know, who would have thunk it! - and Norse Code takes place in the near future where things have gone to the dogs. Or should that be Fenris? Van Eekhout plays with mythology, showing his competence as a real modern day skald, embroidering on old stories, giving it a new spin, making it his own, blending it with a dry humour and honesty I sometimes fail to see in urban fantasies, when it seems that the author is trying that bit too hard.

Norse Code is the type of book that lives long in your memory because it's clever and fun and unique. There is a smattering of romance added to the dash of chaos and it's handled with ease. There are bigger things going down than an unexpected romance between a Valkyrie and a fallen god.

Sadly, if you want to read Norse Code, you have to buy it in via one of the online stores or if you visit an indie bookshop, I’m sure they’ll be able to buy it in. I know that Forbidden Planet in London has copies in stock. I make sure to check each time I go in.

I hope that if you do buy Norse Code to read, you come to the blog to tell me what you think about it - or better yet, contact Greg to tell him.

Norse Code’s been published over in the States by Ballantine Books - SPECTRE - and is out now, having been released in May 2009.

Ay, the States always gets everything late!

? Normally it's England who get everything last (mumbles about video games and anime in particular).

The book sounds fab though. Definitely my kind of story.