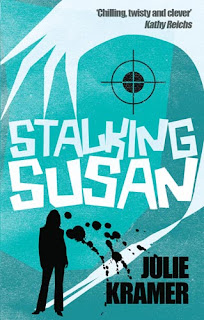 Television reporter Riley Spartz is recovering from a heart-breaking, headline-making catastrophe when a long-time police source drops two homicide files in her lap in the back of a dark movie theatre. Both cold cases involve women named Susan strangled on the same day, one year apart. Last seen alive in one of the poorest neighbourhoods, their bodies are each dumped in one of the city’s wealthiest areas. Riley senses a pattern between those murders and others pulled from a computer database of old death records. She must broadcast a warning soon, especially to viewers named Susan, because the deadly anniversary is very fast approaching.
But not just lives are at stake – so are careers!

I fell into reading Stalking Susan because it was slender, it looked interesting, I've not read crime for ages and also, I liked the fact that it was not a police procedural.

Julie Kramer's writing style is pared down and unfussy. Riley is a character readers will like, vulnerable because of an ugly incident in her past, something she thinks she's to blame for, yet strong enough to face up to her past, realising that her future is at stake if she doesn't sort herself out quickly.

Riley is an interesting mix of hardnosed pragmatic journalist who hungry for ratings, her next story and vulnerable single woman with a lot of history. I liked her. I liked her voice, her attitude and her outlook. I particularly liked that she didn't sell herself short or make martyr-like compromises.

Stalking Susan plays out within a few weeks' time, so the pace is fast but not so that you feel rushed. Riley has enough down time to make a solid impression on you. A lot of crime and thrillers are plot driven with paperthin characters and I'm happy to say that Stalking Susan is exactly the other way around - strongly character driven so that the plot feels natural. There are several sub-plots, with other cases being investigated, not just the Susans case so we have a chance to see how tv stations work behind the scenes and how clever thinking and a nose for a story is an investigative journalist's best assets. The fact that the author took the time to explain how script was written for newscasters to read lured us deeper into the story.

Needless to say, I enjoyed Stalking Susan - I thought it was something fresh and new. How Riley goes about putting the case together from very few (well, no clues, really) to building a solid case, was an incredible journey. It went hand in hand with her own story of survival as we meet her in a not very positive place at the beginning of the story.

A theme throughout the novel is that of how grief changes people, how it impacts on the lives of the investigators and those directly affected by the deaths of these various women. The author handles it well, withholding too much heart searching and introspection by giving us a character that has a job to do who has both empathy and understanding for those whose lives she affects when making her news shows.

It's clever, it kept me wondering: who is the suspect? And it wasn't until the last couple of pages that I figured it out. It's a job well done from an author brand new to me, so I'm keen to find more books.

Stalking Susan is out now here in the UK. The second novel featuring Riley Spartz called Missing Mark is being released later this year from Piatkus. If crime's not something you're fond us, give Stalking Susan a try - it's different and new enought to perhaps lure you to the crime-side! (uh, in a good way, not turning you into a criminal or anything!)

Find author Julie Kramer's website here.
Who wrote this? Liz at 8:22 am