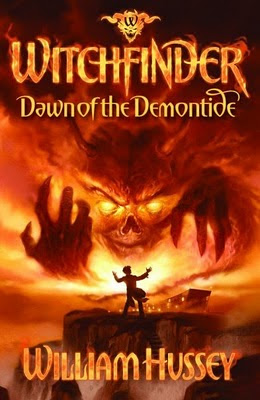 Jake Harker is an outsider, a loser whose nose is always in a horror comic. That is until horror stops being fiction and the Pale Man and his demon Mr Pinch stop Jake on a dark, deserted road. That night, under a tree called the Demon's Dance, Jake will learn the true meaning of terror . . .

Jake Harker’s always felt like an outsider, a socially awkward boy labelled as creepy because of his love of horror books and comics. His life isn’t perfect, but he gets on with it, blissfully unaware that his world is about to brutally and irrevocably collide with a centuries old battle between good and evil, courtesy of the sublimely terrifying Messrs. Quilp and Pinch. The time of the Demontide is fast approaching, a time when all the demons of hell gather together to try smash through the ancient seal that is all that stands between the world we know and hell to earth.

The battlelines become blurred as Jake beings to comprehend the scale of the conflict and the terrible reality of belief in the greater good. There’s little respite as the time runs out, and he has to swiftly come to terms with several nasty truths and use every ounce of his wits to not only try thwart the ruthless coven seeking to facilitate their dark master’s ascension (including himself) but to simply stay alive.

It’s a dangerous path, and with the memory of the books shocking opening in mind, it’s one whose destination is never a cut and dried certainty.

Witchfinder sports some wonderfully dark imagery and a cast of ruthless, utterly creepy antagonists set against a likeable, balanced main character and his mismatched friends. Even better is that the bad guys are allowed to be Bad- self serving, sworn to the forces of darkness and addicted to their demon-granted powers, it’s refreshing to see them acting accordingly and justifying the epithet of ‘evil’.

Witchfinder could have benefited from a bit of a nip and tuck in places, and no doubt the final version will have been trimmed accordingly. However, it doesn't detract from it delivering some haunting chills, wrapped up in a smart, punchy story that keeps you turning pages long after you should’ve turned the lights off.
You can find more info and cool stuff on the Witchfinder website.
Who wrote this? Mark at 8:30 am