City of Ships by Mary Hoffman 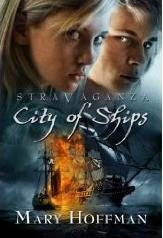 Isabel Evans has just made a very surprising discovery: she is a Stravagante, somebody who, with the help of a talisman, can travel in time and space to the country of Talia in a parallel world. When faced with the extreme danger that Talia presents, the normally shy and quiet Isabel is forced to dig deep and find strength she never knew she had, as she is plunged in to a world of pirates, ferocious sea battles and deadly adversaries.

I have to start by admitting that this is the first Stravaganza novel that I’ve read. As this is the fifth in the sequence I’m a little late to the party. I was interested to find out if this would leave me at a disadvantage or whether I’d be able to slot straight in. It’s the character of Isabel who makes that possible; she’s as clueless as me! She knows nothing of the world of the Stravagante and has problems much closer to home to keep her occupied. Her twin Charlie is the first born and the high achiever at school, sports and everything except art. Isabel has even created an imaginary twin that she can be better than to enable herself to cope. She spends the rest of her time trying to slip through life being invisible.

She spots a velvet bag full of mosaic tiles on the floor, unknown to her this is ticket to Talia (like our Italy but over four hundred years ago). From this moment Isabel (and the reader) is propelled into another world. She arrives in the city of Classe which is in imminent danger from attack. It’s Isabel’s job to find out how she can help and what her purpose is. The lovely thing about this novel is the way that her emotional journey perfectly matches the action. Initially, it’s as if she’s on holiday but as her time in Talia lengthens her understanding of exactly what’s at stake matures her.

Alongside the world of Talia, Isabel finds herself moving in a new circle at school. She has all the other Stravaganzas to get to know. There’s Georgia, Nick, Sky and Matt who welcome her. Each of these have been stars of their own book in the series. Soon Isabel is growing in confidence, has her eye on Sky whilst trying to keep her old friends happy and keep Charlie’s suspicions at bay. I have to admit that I struggled slightly to understand the how characters have died in one world but then lived in the other but soon caught up. Also, if you’re a newbie to Talia like me it’s a good idea to check the character list at the back of the book to get everyone straight.

If I had one criticism of this book it would be that everyone is classified as pretty, beautiful, stunning, or ugly. Isabel gets prettier as she grows in confidence. I understand that self-belief makes a person more attractive and that the language is appropriate to the age group but I’d prefer to make up my own mind if I find a character beautiful or not.

I enjoyed the sea theme of this book. From the moment Isabel arrives the writing whisks you away; I could hear the seagulls. The attention to detail is amazing and the world building immaculate. This book also has a gritty side though, the detail on boat warfare and the amount of damage that these sort of battles can cause is made clear. For those who have been following the whole series, favourite characters progress and there’s good continuation. It definitely made me want to check out the rest of the earlier books.
Who wrote this? Essjay at 11:28 am

Ooh, another one for the TBR pile! Thanks for the review.

I've got this on my TBR pile - and I haven't read the rest of the series either :) Great taste in books!