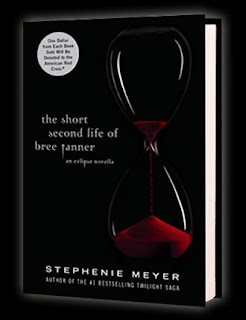 From the PR sheet I received today:

Atom, an imprint of Little, Brown Book Group UK, has announced that it will release the first new title from Stephenie Meyer in nearly two years. The Short Second Life of Bree Tanner is a novella told from the point of view of Bree, a character originally featured in Eclipse. The novella (at 192 pages) will be released on both sides of the Atlantic at 5:05 a.m. BST on Saturday 5th June, 2010 in hardback priced £11.99.

“I’m as surprised as anyone about this novella,” said Stephenie Meyer. “When I began working on it in 2005, it was simply an exercise to help me examine the other side of Eclipse, which I was editing at the time. I thought it might end up as a short story that I could include on my website. Then, when work started on The Twilight Saga: The Official Guide, I thought the Guide would be a good fit for my Bree story. However, the story grew longer than I anticipated, until it was too long to fit into the Guide.”

As a special thank you to fans, Meyer is giving them exclusive access to the novel on a dedicated website, http://www.breetanner.com/, from 7th June to 5th July 2010, where fans from around the world will be able to read the book online in English. “I’d always considered The Short Second Life of Bree Tanner as something for the fans,” said Meyer. “They have been so supportive of all things Twilight.”

Ursula Mackenzie, CEO and Publisher of Little, Brown Book Group commented: "The prospect of a new book from Stephenie Meyer has been tantalising readers for a very long time. We're thrilled to be able to announce that the waiting is over and Stephenie's millions of fans will soon be able to read this exciting new work."

The Short Second Life of Bree Tanner is the riveting story of Bree Tanner, a newborn vampire first introduced in Eclipse, and the darker side of the world she inhabits. The novella chronicles the newborn vampire army’s journey as they prepare to close in on Bella Swan and the Cullens, following their encounter to its unforgettable conclusion.

The character Bree not only features prominently in the book Eclipse, but in the upcoming movie from Summit Entertainment. “Stephenie was gracious enough to let me read a draft of the novella while we were prepping the movie The Twilight Saga: Eclipse,” said Director David Slade. “I thoroughly enjoyed the story and it gave us great insight and inspired location choices and the tailoring of scenes. I think fans are going to love the fascinating details involved in the loves, fears and actions of an emerging vampire.”

The Short Second Life of Bree Tanner will also be available as an ebook from 11a.m. BST on 5th June 2010. Additionally, more information about the previously announced The Twilight Saga: The Official Guide, including publication date, will be released by the end of the year.

In less than five years, Stephenie Meyer has become a worldwide publishing phenomenon. The Twilight Saga’s translation rights have been sold in nearly 50 countries and 100 million copies have been sold worldwide.
***
So, I've not read anything Twilight for ages and ages but I do have a copy of the graphic novel, which, I will be fair, looks stunning. I'll be reading that later in April to review. But, I have to admit that I'm a bit perplexed about the Bree story as I genuinely don't remember her at all! Am I going crazy? Maybe it's time for a re-read?
Who wrote this? Liz at 3:04 pm

Ooooh, this is exciting! I am so looking forward to this, thanks for the news!

Bree was the young new born vampire in Eclipse at the end, when the fighting is over. Is that enough to help you remember? Much else would spoil that part of the book.

I'm pretty intrigued by this, but I have no memory of this character either. I'm guessing she's someone from one of the Cullen vamps' backstories, maybe. Either way I'll probably check this out - thanks for sharing.