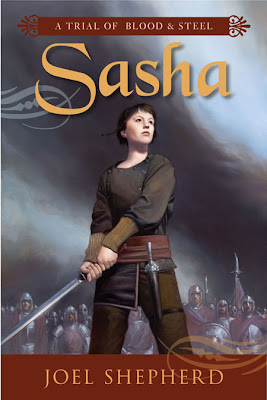 Spurning her royal heritage to be raised by the great warrior, Kessligh, her exquisite swordplay astonishes all who witness it. But Sasha is still young, untested in battle and often led by her rash temper. In the complex world of Lenayin loyalties, her defiant wilfulness is attracting the wrong kind of attention.

Lenayin is a land almost divided by its two faiths: the Verenthane of the ruling classes and the pagan Goeren-yai, amongst whom Sasha now lives. The Goeren-yai worship swordplay and honour and begin to see Sasha as the great spirit—the Synnich—who will unite them. But Sasha is still searching for what she believes and must choose her side carefully.

When the Udalyn people—the symbol of Goeren-yai pride and courage—are attacked, Sasha will face her moment of testing. How will she act? Is she ready to lead? Can she be the saviour they need her to be?

For all that we’re introduced to Sasha in the midst of a fight, albeit a sparring bout, and it’s clear that she’s someone to be reckoned with when she has a blade in hand, it’s quite some time until we find out exactly how she copes in open combat. But it's the route from the opening to the moment that blood is first shed that's so important here, as it fleshes out her character and lays the foundations of the world that she inhabits, something which is fundemental for the rest of the story. Despite the threat of war being a constant subtext, the violence within the story never feels gratuitous, even though it's bloody and well executed.

Joel deals with the roots of the civil uprising that Sasha is swept up in very well, feeding the information through as the characters themselves make the connections, so it never feels contrived. You’re left with a clear sense of the smouldering powderkeg of the Goeren Yai ‘s long repressed anger and how it threatens the foundations of the kingdom.

Ably supported by a cast of distinctive secondary characters, Sasha’s journey from a rebellious, free living student to military commander and rebel leader is believable, gripping and very more-ish, setting the bar very high for the rest of the trilogy.

Glad you enjoyed the book. Should point out its a quartet not a trilogy. Books coming out in six month intervals, so not too long a wait.

Oooh 4 books! Never heard of this series - it is dutifully going on my wish list.