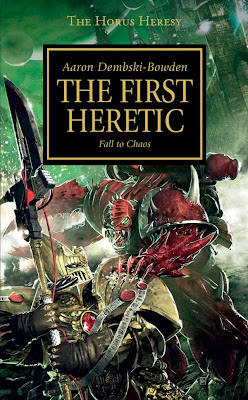 Amidst the galaxy-wide war of the Great Crusade, the Emperor castigates the Word Bearers for their worship. Distraught at this judgement, Lorgar and his Legion seek another path while devastating world after world, venting their fury and fervour on the battlefield. Their search for a new purpose leads them to the edge of the material universe, where they meet ancient forces far more powerful than they could have imagined. Having set out to illuminate the Imperium, the corruption of Chaos takes hold and their path to damnation begins. Unbeknownst to the Word Bearers, their quest for truth contains the very roots of heresy…

Reeling in the wake of the reprimand levied by the Emperor, the foundations of his belief undermined , Lorgar, Primarch of the Word Bearers, returns to his homeworld to contemplate the future of his Legion and the nature of his service to the Emperor. He finds comfort in the ancient rituals of Colchis, the same religion that he had quashed in a bloody civil war. With this an obsession is born, one that echoes the voice that calls to him in his dreams, beckoning him towards the edge of the galaxy.

The story begins 43 years before the infamous betrayal at Isstvan V and follows Argel Tal, a captain of the Legion, as his loyalty to Lorgar sets him on the route that will culminate in the ultimate heresy taking root in his flesh.

Aaron has dug deep here, giving us a solid character who you can’t help but empathise with, even while you know that what he is doing is wrong on so many levels; because you can get under his skin, and understand who he is, and what drives him and his battle-brothers, the tragedy of what is unfolding around him carries that much more weight. Right to the bitter end, when he and the remnants of his company stand bloodied and tattered in body and soul on the ravaged battlefields of Isstvan, their erstwhile brethren lying broken at his feet, Argel remains an engaging and sympathetic character.

This isn’t an action heavy story, although Aaron is certainly no slouch in this department- his visceral depiction of the carnage of Isstvan flies off the page. The First Heretic doesn’t suffer for that though in the slightest; it’s an intelligent and gripping portrayal of a once loyal Legion’s slow fall into the grip of Chaos. The road to Hell is indeed paved with good intentions.

If there was ever any doubt or worry about Aaron’s ability to do justice to the Horus Heresy series, it hasn’t so much as been dismissed as shot into the heart of the sun. This is brilliant stuff.

I am not much of the science fiction reader but I like your synopsis here.

I just finished A D-B's Night Lords book, Soul Hunter. It reminded me of the best HH books like False Gods, The Galaxy Burns, and A Thousand Sons, but with darker subject matter.

I was actually going to pass on this one, but the way Soul Hunter was such a page-turner, I'm getting The First Heretic as soon as it hits the shelves.