Journey to the River Sea by Eva Ibbotson 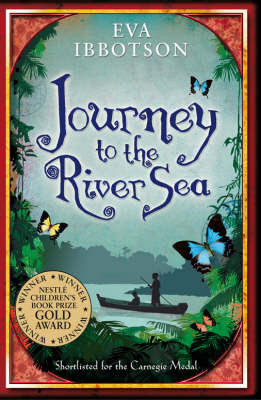 It is 1910 and Maia, tragically orphaned at 13, has been sent from England to start a new life with distant relatives in Manaus, hundreds of miles up the Amazon. She is accompanied by an eccentric and mysterious governess who has secret reasons of her own for making the journey. Both soon discover an exotic world bursting with new experiences in this highly colourful, joyous and award-winning adventure.

I am thinking of changing this month's themed title from Under 14's Only to Books that Liz Should Have Read Ages Ago. Also, I apologise for any new obsessions that may result from reading this month's reviews. *evil laughter*

Ack! Another new to me author (you'll be seeing a lot of those this month) is Eva Ibbotson.

I have had her books on my shelves for ages and ages but somehow never got around to reading them. Until now that is.

Reading "Journey to the River Sea" reminded me of some books I read as a child. These books were old and musty and belonged to my dad and sat on the shelves unloved until I came to them. One I remember particularly well is where a group of young American kids go on holiday to an Eastern Block country and have tremendously fun but tidy adventures. There is an element of deep nostalgia about these books, as they were written in the 1940's / 1950's. And there was a sense of expectation and breathlessness about them that I loved. I have only come across one other book in a similar vein recently, and that was Dead Man's Cove by Lauren St John. And now, of course, Journey to the River Sea.

It is set in 1910 so we are in relatively modern(ish) times. There are such things as telegraphs and electricity. A lot of big discoveries have been made, several during the past century, but everything is still very different and new and although the world is shrinking it is still a big place. We have explorers going into the Amazon, discovering new plants and animals. Expeditions to far-flung places are still undertaken and local tribes in areas are still "savages" to us. Travelling long distance still takes a decent amount of time by ship and boat and there are carriages and empires to be built in foreign countries. Adventure definitely awaits anyone gutsy enough to put a foot out their door.

Bring in the lovely Maia who is this brilliantly heroic and intelligent main character. Having lost her parents in accident, she has been living in care for a little while now whilst the authorities try and find out her nearest relatives. Maia is the type of girl who is studious and honest and a good academic. She is thoughtful and sweet and a little bit mischievous. If she has a fault, it is that she is perhaps too trusting and too optimistic. When she hears that she does indeed have family, and that they are happy for her to come and live with them, she is excited. But when it becomes clear she is heading for the Amazon, she becomes a bit nervous. Her school mates all exaggerate the dangers of the Amazon, giving us a good close-up view of how some of us still see places like the Amazon.

'There are huge crocodiles in the rivers that can snap your head off in one bite. Only they're not called crocodiles, they're called alligators because their snouts are fatter, but they're just as fierce.''

"And if you just put one hand in the water there are these piranhas that strip all the flesh off your bones. Every single bit. They look just like ordinary fish but their teeth are terrible,' said Melanie.

Daisy offered a mosquito which bit you and gave you yellow fever. 'You turn as yellow as a lemon and then you die,' she said.'And it's so hot the sweat absolutely runs off you
in buckets.''

But Maia is made of stronger stuff. After spending a night in their library, she comes away feeling stronger, more confident in her decision to go and live with her Uncle, his wife and two daughters, twins.
But she is not to go on her own. Her uncle has decreed that she should travel with a chaperone who is also to be her and her cousins' governess, Ms. Minton. Now, personally, when I heard this and initially read the description of Ms. Minton I thought "oh great, another miserable bizarre old spinster" but of course, I got shown up, because Ms. Minton, although she is unfortunate looking, has the soul and attitude of a survivor and explorer, loving books and discovering the world. Well, as much as you can on an underpaid wage.
Maia and Ms. Minton (Minty) become close during their extended sea journey. Maia is held rapt with thoughts of exploring the jungle, the exotic lives her cousins are leading in Manaus and adapting to living in the jungle where things only appear to be tamed.
Once Maia comes to meet her family, she's not sure if it's her of it it's them, because things are by no means what she expects. The twins are spoiled rotten and are mean, her uncle is a recluse, preferring to spend time in his study with his collection of false eyeballs (yes, you read that right) and her aunt is manipulative and obsessed with eradicating anything "foreign" from their house on the banks of the Amazon. She obsessively sprays insect repellent all over the house to keep the bugs out and refuses to acknowledge that she is in Brazil. She sees the locals as barbarians and are mean towards them. This is not the life either Minty or Maia expected.
But being who they are, they find a way around these things and soon Maia has the freedom to explore the jungle and her own creativity.
There is much I'm not telling, but let me just say that it is a wonderful bit of writing, with rich characters and in a way it is a love letter to Brazil and the jungle. There is a sub-plot with a lost English heir, some questionable actors who travelled to Manaus to perform in the opera house there and a whole tranche of other reveals that are just excellent.
I enjoyed Journey to the River Sea and will be reading The Ogre of Ogleford for later this month. Definitely try Eva Ibbotson if you've not had the chance to do so before. And just a further comment about the cover - the writing does the cover justice and vice versa. Am a bit smitten.
Who wrote this? Liz at 9:16 am

Very interesting review. Got hooked and read to the end. Haven't heard of this author. Your review is deeply engaging. Thanks

I have tried to read this book many times but not finished it. Thanks for the great review. I think I might finish it now!

Revelations! Little M is an Ibbotson fan. She loved Journey to the River Sea and recommended it to her teacher (I think it may have sparked her idea of a book blog a while back). She also recently discovered Lauren St John through Booktrust's Booked Up scheme (now defunct) and loved Dead Man's Cove.

Eva Ibbotson is a fantastic writer. One of my favourites by her is The Dragonfly Pool, you should read it!